It is the stuff golfers’ dreams are made of: a formal invitation from Augusta National Golf Club to compete in the US Masters.

When Scott Stallings, a real estate agent from Georgia, and his wife Jenny opened the door to their house on New Year’s Eve, they found just such an invitation had arrived via UPS.

The envelope, in a colour instantly recognisable to golfers as Masters green, was emblazoned with the gold logo of the Augusta National Golf Club. And it was addressed to Stallings.

Inside was another envelope bearing his name – Scott Stallings – in calligraphy and an invitation from the club’s board of governors, signed by Fred S Ridley, the chair of Augusta National, cordially welcoming him to participate in the Masters in April.

“You just got invited to the Masters,” Jenny Stallings told her husband as he unpacked the car. Both are “very casual golfers”, they said, but are not up to the level needed to compete alongside the likes of Rory McIlroy and Scottie Scheffler.

But for a split second, Jenny Stallings said, her husband thought his moment had arrived. 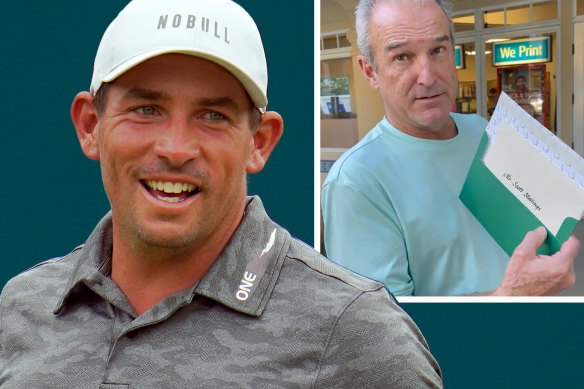 Then he realised the invitation was supposed to have been sent to another Scott Stallings, the professional golfer and three-time PGA Tour winner who is ranked 54th in the world.

“Right away, I know this isn’t me,” said Stallings, the real estate agent. “How in the heck did it show up here?”

The couple placed the invitation on their dining room table and decided to contact Stallings, the golfer. They found the golfer on Instagram and sent him a direct message saying he had received his invitation to the Masters at his house in Georgia and was “sure this is NOT for me”.

“I play but wow!” Stallings wrote. “I think we have some confusion because of our names, our wife’s names and geographical location.”

Stallings, the golfer, who lives in Tennessee and whose wife is also named Jennifer, responded with a laughing-with-tears-of-joy emoji, indicating he thought it might be a prank.

So Stallings, the real estate agent, followed up with photos of the invitation. “I’m really not kidding I promise,” he wrote in another direct message.

The professional golfer shared the direct message from his namesake on Instagram.

“Literally had been checking the mailbox five times a day and then I got this random DM yesterday,” the golfer wrote. “My Masters invite got sent to a different Scott Stallings.”

Augusta National did not immediately respond to emails and calls seeking comment about how the invitation was sent to the wrong person. The club has asked players to RSVP to invitations since the Masters began in 1934.

Stallings, the golfer, who was in Hawaii for the Sentry Tournament of Champions this week, has not competed in the Masters since 2014.

“Honestly, I thought my wife had it and was doing something for Christmas,” the golfer, 37, said on Monday, according to the Associated Press. “But then nothing came, and we left two days after Christmas.”

On Monday, the two Scotts and their wives spoke on the phone and made arrangements to exchange the invite.

Stallings, the golfer, said in an interview on Tuesday that he had invited his namesake to dinner and a practice round at the Masters to thank him for turning over the invitation.

Jenny Stallings recorded a video of her husband, the real estate agent, parting ways with it at a UPS store.

“Because I’m having to send my invitation to play at the Masters back to the other Scott Stallings,” he said, frowning.

And then it was gone, on its way to that other Scott Stallings, the one who really will get to compete in the Masters.

“It was like getting Willy Wonka’s golden ticket,” the real estate agent said. “It was a hard one to let go of because I know how prestigious it is.”

This article originally appeared in The New York Times.

Tiger Woods at Torrey Pines: A look back at his wins at the venue