Adam Scott has mounted a surprise defence of Greg Norman’s breakaway tour, claiming LIV Golf is “not just pure evil” and cheekily urging compatriots Cameron Smith and Marc Leishman to make him an offer to join the Saudi-backed competition.

On the same day he confirmed he will play in his first tournament in Australia for three years, the country’s only US Masters winner delivered his most expansive verdict on golf’s civil war – and it’s not all damning for the rebel circuit.

“Maybe because I’m a little less emotive about it, I can be a voice of reason for one side or another,” said Scott, who will play both the Australian PGA and Australian Open this summer.

“I don’t necessarily see LIV as just pure evil for the game of golf. It’s also providing some interesting opportunities from the PGA Tour side as well. Hopefully we can get beyond people having shots at each other and each organisation can move on with what they want to do. 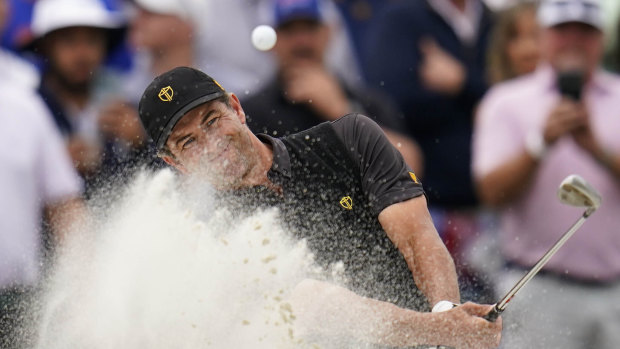 The 29-year-old and Leishman have been charged with running an Australian team for next year’s LIV Golf league, which will feature a tournament Down Under next April.

Asked how his relationship with the pair was, given he has remained with the PGA Tour, Scott said: “The three of us are fairly close I would say, and we have all shared our thoughts on it.

“I completely understand anybody doing it. They have been offered an opportunity and it suits them. More power to them. I really want it to work out for them. They may or may not be taking a risk.

“As far as Cam and Leish recruiting me, they’ve got plenty of cash now so they’re more than welcome to make me an offer … I probably haven’t been able to put myself in a position where I’m willing to give up trying to win major championships.”

LIV Golf is yet to be granted official status for world rankings points, meaning the likes of Smith, who rose to as high as No.2 in the world, and other LIV stars such as Dustin Johnson, Joaquin Niemann and Bryson DeChambeau will see their positions plummet in the next six months.

In a recent interview with the Herald and The Age, Norman said the body which ran the official world rankings would be “obsolete” if it didn’t grant LIV’s application.

Scott said his relationship with Norman was “unchanged” and he hadn’t spoken to LIV’s frontman since the end of last year.

“This is something he truly believes in and I don’t begrudge him for going for it one bit,” Scott said. “Sure, it has rocked the waters of golf, which has never really happened … I am still optimistic that people’s intent is still good and we will come to a better place moving forward.”

Scott will join Presidents Cup teammate Cameron Davis, Smith, Leishman, Min Woo Lee and Lucas Herbert in returning for Australia’s summer of golf, which will include the national championship on Melbourne’s sandbelt.

It will be the first time the Stonehaven Cup has been contested since 2019.

“There’s lot of things to look forward to,” Scott said. “It’s been such a long time since I’ve been home. It’s exciting to be coming back to play some golf.”

European Tour players to be hit with one-shot penalties