Washington, DC: Phil Mickelson and 10 other golfers sued the PGA Tour over its decision to suspend them for playing the new LIV Golf circuit, according to an antitrust filing on Wednesday that revealed the Hall of Famer cannot apply for reinstatement until 2024.

“As part of its carefully orchestrated plan to defeat competition, the Tour has threatened lifetime bans on players who play in even a single LIV Golf event,” the golfers said in the complaint.

They asked the court to declare the punishments illegal and to award damages and attorneys fees.

In a letter to players, the PGA Tour acknowledged that the 11 golfers had been suspended and indicated that the Tour was not inclined to back down.

“These suspended players – who are now Saudi Golf League employees – have walked away from the TOUR and now want back in,” commissioner Jay Monahan wrote in a letter to members. “We intend to make our case clearly and vigorously.” 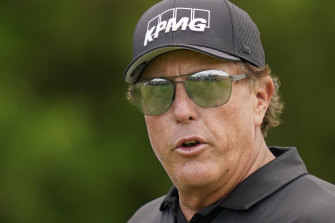 In July, news broke that the US Justice Department was investigating whether the PGA Tour broke antitrust law in fending off the LIV Golf circuit.

The $255 million LIV series is being bankrolled by Saudi Arabia’s Public Investment Fund (PIF), which critics say is a vehicle for the country to improve its image in the face of criticism of its human rights record.

The lawsuit also shed light on the status of fan favourite Mickelson, who had taken a self-imposed hiatus in February when excerpts from an unauthorised biography on him revealed that he called the Saudis “scary” but that he would look past their human rights records to gain leverage with the PGA Tour.

According to the lawsuit, Mickelson was suspended by the PGA Tour in March for, among other alleged reasons, trying to recruit players to LIV Golf and that his appeal was denied.

Mickelson applied for reinstatement in June, the lawsuit says, but that request was denied given his participation in the inaugural LIV event earlier that month.

In addition to denying Mickelson’s request, the lawsuit said the golfer was forbidden from seeking reinstatement until March 2023, which was then extended until March 2024 after he played the second LIV event.

Mickelson’s ban was only announced in June, shortly after he teed off in the first LIV event, when the PGA Tour announced its decision to suspend all members who joined the lucrative series and said anyone else who made the jump would face the same fate.