The 2007 US Open champion and 2009 Masters winner Angel Cabrera was arrested on Friday (AEDT) by federal police in Brazil and faces extradition to his native Argentina, Associated Press reported. 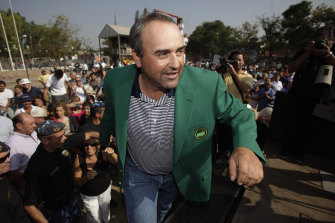 Former Masters winner Angel Cabrera has been arrested in Brazil.Credit:AP

He was on Interpol's Red Notice list, meaning the international police organisation had asked law-enforcement bodies worldwide to locate and provisionally arrest a person pending extradition, surrender or similar legal action. It is not considered a formal arrest warrant or evidence of guilt, but rather a notice that a person is wanted internationally.

According to reports in Argentine media, multiple women have accused Cabrera of abuse; Cabrera's ex-wife, Silva Rivadero, filed two charges against him; and Cecilia Torres, another former partner, claimed Cabrera had punched her, threatened her and attempted to run her over with his car in 2016. Cabrera was interviewed by Argentine authorities over the latter accusation in 2017 and released.

The Argentine newspaper Clarín reported last week that Cabrera, 51, nicknamed "El Pato" ("The Duck"), had until recently been in the US on a tourist visa. He had wrist surgery there in October, Clarín reported. But Cabrera's visa was set to expire, and he couldn't renew it because of his presence on the Interpol list.

It's unclear whether US authorities were searching for Cabrera while he was in the country. Comment had been sought from the Justice Department's Office of International Affairs.

The US has an extradition agreement with Argentina. However, a Justice Department document states that federal law "prohibits the arrest of the subject of a Red Notice issued by another INTERPOL member country, based upon the notice alone" because it does not meet probable-cause standards for arrest under the Fourth Amendment.

Instead, a foreign country must submit an extradition request to the US State Department, which then must decide whether to pass the request on to the Justice Department, the agency responsible for executing the extradition.

An email to the State Department asking whether Argentina had requested that Cabrera be extradited from the US was not immediately returned.

Cabrera is the only South American golfer to win the US Open or Masters. (He also lost in a sudden-death play-off at Augusta to Australian Adam Scott in 2013). But he has played sparingly in recent years, and his last appearance was a withdrawal after two rounds of the Pure Insurance Championship, a PGA Tour Champions event for golfers 50 and older in September.

Cabrera did not play in this year's rescheduled Masters in November, citing the wrist injury.