Rory McIlroy was in control of all facets of his game as he charged into the first-round lead with a six-under-par 65 at the WGC-Mexico Championship on Friday (AEDT). 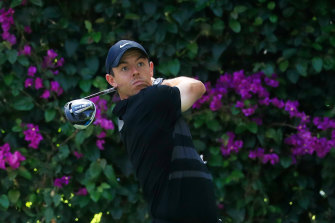 Rory McIlroy is in the lead in Mexico City.Credit:Getty Images

"I like this place, like the golf course, and have always played well at altitude for whatever reason that is," said the world No.1 after capping off his day by sinking a three-metre birdie at the last.

McIlroy won the World Golf Championships tournament in Shanghai in November and victory this week would see him complete the set of all four WGC events.

The Northern Irishman has been in stellar form early in the new PGA Tour season, with a tie for fifth in Los Angeles on Sunday his worst result in four starts.

Accuracy from the tee is crucial at the tree-lined Club de Golf Chapultepec but McIlroy did not hold back, hitting three drives of more than 334 metres.

But it was his putting that pleased him most a week after an ill-fated experiment with a 35-inch (89-centimetre) model that was slightly longer than his usual putter.

"It didn't work quite the way I wanted so … happy to have old faithful back in the bag and it worked well today," he said.

"It was definitely validation to going back to the putter I'd been using for the last 14 months. If I keep putting like that, I'll be very happy."

Nipping at McIlroy's heels, Thomas and Watson both mixed five birdies with one bogey in shooting 67 as they bounced back from missing the cut last week.

Two-times Masters champion Watson, who enjoyed a round with pop star Justin Bieber last weekend after missing the cut at the Genesis Invitational, had better luck on the greens. 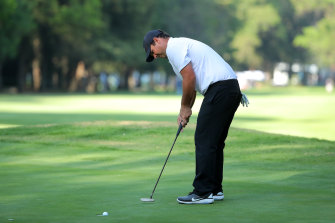 Patrick Reed is still having to deal with the golf scandal that won’t quit.Credit:Getty Images

Patrick Reed, meanwhile, displayed a single-minded focus, putting a rules controversy that seemingly will never die out of his mind long enough to shoot two-under-par 69.

Reed is still being reminded of the incident for which he received a two-stroke penalty for improving his lie in a sandy waste area at December's World Challenge in the Bahamas.

World No.2 Brooks Koepka, who is not playing in Mexico City, weighed in earlier this week when asked whether he thought Reed had been cheating.

"Yeah, I don't know what he was doing, building sand castles in the sand," Koepka told SiriusXM PGA Tour Radio.

"You know where your club is. I took three months off and I can promise you I know if I touch sand. If you look at the video, obviously he grazes the sand twice and then he still chops down on it."

"I've said what I have to say about what happened in the Bahamas, and at the end of the day, all I'm trying to do is go out and play good golf and trying to win a golf championship and hopefully run Rory down," said the 2018 Masters champion.

At the other end of the field, defending champion Dustin Johnson ran up four bogeys and a double in a 76 that left him equal 62nd in the 72-man field.