Korean In Gee Chun denied Lee her third major by one shot and claimed her third instead in a dramatic finish at Congressional. 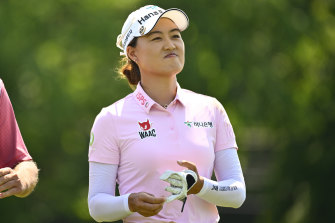 After blowing a three-stroke overnight lead with four bogeys in a diabolical outward nine, Chun rallied down the stretch to post a final-round three-over-par 75 and hold off Lee and American Lexi Thompson by the slimmest of margins.

After starting six back, Lee fell further behind following two consecutive birdies to open her final round.

But Australia’s recently crowned US Women’s Open champion bagged four birdies in 12 holes to snatch the clubhouse lead in a thrilling climax.

Seemingly reeling it and out of it, Chun steadied with a birdie on the 16th to nab a one-stroke buffer over Lee and the faltering Thompson heading up the last hole.

The 27-year-old Korean went perilously close to finding the water with her approach, which could have sent Lee and Thompson into a play-off.

But Chun regrouped to save par from the back of the green – as Thompson missed her birdie attempt – to add the PGA Championship to the US Women’s Open in 2015 and the Evian Championship in 2016.

“It just means a lot because I didn’t have any wins in three and a half years,” said a teary Chun.

“My sponsors … coach, caddie, family and friends never gave up on me no matter how I did.”

Eyeing a second PGA Championship, Lee’s 2021 Tokyo Olympics teammate Hannah Green finished in a share of fifth at one under – but would have rued closing with a disappointing 75.

If she’d matched Lee’s 70, Green would have won by a shot.