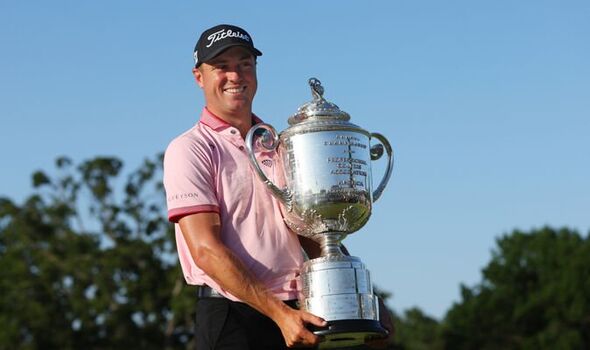 Matt Fitzpatrick’s bid to become the first English US PGA champion in 103 years fell short at Southern Hills as Justin Thomas surged through the faltering frontrunners to win the Wanamaker Trophy in a play-off.

Fitzpatrick saved his worst of the championship for last with a bitterly disappointing 73 to miss out by two shots as Thomas came from seven shots back at the start of the day to take Will Zalatoris down in extra time.

Two birdies in the three-hole play-off from Thomas settled matters with Zalatoris unable to respond at the 18th. It gave Thomas his second USPGA title and continued a run of American winners in the event stretching back to 2016.

It was a harsh lesson learned for Fitzpatrick who froze in the headlights playing in the last group for the first time at a Major and finished in a tie for fifth with Tommy Fleetwood.

“It’s just disappointing knowing that you’re two shots outside a play-off and you feel like you’ve got the game to make the play-off and go on to win.

“I shoot level par today and I win it outright. It wasn’t the day that I wanted.”

He wasn’t the only one to suffer from the jitters. The absence of any Major-winning experience amongst the challengers turned the final round into a nervy, incoherent scrap which, while high on drama, was low on quality.

No-one in the last two groups broke par. Chile’s Mito Pereira, the overnight leader, clung on to a one-shot advantage on the 18th tee but pushed a panic-stricken drive into the creek and did not even make the play-off.

Southern Hills is home to a distinctive pastel-pink clocktower which looks the sort of spot Rapunzel might have been detained in. Pereira must have felt like climbing up it and throwing himself off.

For Rory McIlroy, who finished in eighth place three shots back, there was frustration at another Major which got away.

Just as at the Masters, there was another strong finish from the Northern Irishman with a 68 yesterday but the refrain of too little, too late was a record stuck on repeat after his costly 74 on Saturday.

Fleetwood produced a blinding dip for the tape with four birdies in his last five holes for a 67 which punched his ticket to next year’s USPGA. Tyrrell Hatton and Justin Rose will be at Oak Hill too after closing 68s.

Laurie Canter signed off his first American Major in style by holing out from the fairway and then confirmed he had joined the Saudi league rebels to help pay the baby bills.

“I’ve worked hard to get here and I like it but at the same time I’m not in a position where I can say I don’t play golf for money. I do, I need it. I have a wife and a child coming in July,” said the 32-year-old from Bath.

PGA Championship to be played without fans at TPC Harding Park