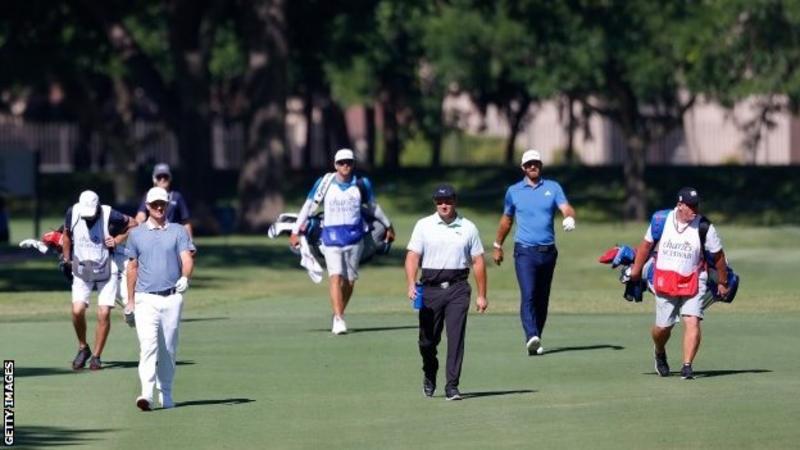 American Harold Varner III birdied the 18th to take a share of the first-round lead with England’s Justin Rose as the PGA Tour returned on Thursday in Texas.

Both players hit bogey-free seven-under-par 63s at a quiet Colonial Country Club, with no fans present.

The early starters observed a poignant minute’s silence at 8.46am local time in memory of George Floyd, the African American who died in police custody.

Eight minutes and 46 seconds is the length of time Floyd was filmed being pinned under the white officer’s knee. His funeral took place in Houston, Texas on Tuesday.

Varner III, one of the few black American professional players on the circuit, spoke at length with PGA Tour commissioner Jay Monahan before this week’s Charles Schwab Challenge. They discussed the Tour’s “potential role in the national conversation and solution” amid global protests in support of the Black Lives Matter movement against racial injustice.

On the course, Varner III birdied his first two holes and was four under after nine. He then birdied the 10th and 12th holes but missed opportunities to join Rose at the top of the leaderboard before holing from 10 feet on the last.

When asked whether the death of Floyd, and global protests had affected his play, he told Sky Sports: “I didn’t think about it out there. I got in my zone. I love playing golf and am fortunate to do this for a living,.

“The platform I have is through golf so I know playing well is a part of that. It goes to show how life is precious and you take every day for what it is.”

Rose, who was out in the first half of the draw, started on the 10th hole and chipped in from the edge of the green with a fairway wood for a birdie.

He was four under after seven holes and then had a run of three birdies from the first before finishing with six straight pars.

The top three in the world, McIlroy, Jon Rahm and Brooks Koepka were all drawn to play together. All three birdied the first but were unable to build on that early momentum.

McIlroy was back at level par after bogeying the sixth but was two under by the turn. However, nine straight pars followed.

American Koepka, ranked third in the world, had four birdies and two bogeys in his two-under 68, while Spaniard Rahm, bogeyed the last to finish on one under par.

Charles Schwab Challenge preview: Who to back for PGA Tour’s return