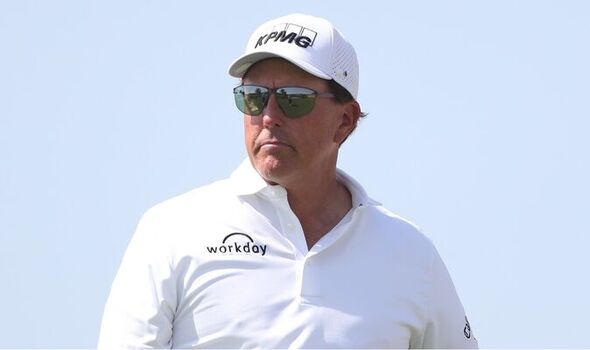 Phil Mickelson has sensationally withdrawn from the PGA Championship after initially being included in the 156-strong field of players, with no explanation given. Mickelson has not played on the PGA Tour since his comment about the Saudi-backed LIV Golf International series surfaced back in February.

He went on to pull out of The Masters, announcing he needed “some time away” from the sport. But his ongoing absence has been tied with the LIV Golf Series, which officially gets underway next month at the Centurion Club.

Just a few weeks ago, Mickelson applied for a release from the PGA Tour to play in the opening LIV Golf Series event. And it appeared as though ‘Lefty’ would make his long-awaited return to competitive golf at Southern Hills to defend his PGA Championship title from last year.

JUST IN: ‘We’ve all made mistakes’ – Greg Norman brushes off Khashoggi killing

“Phil is the defending champion and currently eligible to be a PGA life member and we would have welcomed him to participate. We wish Phil and [wife] Amy the very best and look forward to his return to golf.”

Mickelson made history last year at the PGA Championship in becomin golf’s oldest major winner. He was embroiled in a tense final-round battle with compatriot Brooks Koepka, but held onto win in dramatic fashion.

It was also Mickelson’s first major victory since 2013, when he won both the US Open and The Open in the same year. It’s unclear when Mickelson will return to action, but it could well come at the inaugural LIV Golf Series in June.

But the PGA Tour sent out a memo to players this week that nobody would be given an exemption to play in the event. A number of top players come out and defended the PGA Tour’s stance this week, with Will Zalatoris calling it the “perfect response”.

Justin Thomas also hopes the PGA Tour’s latest statemen will act as a deterrent for anybody hoping to go.

He said: “You know, it’s like, Look, if you want to go, go. I mean there’s been plenty of guys that have been advocates of it and have just talked it up all the time and they have been guys behind the scenes that are saying, ‘I’m going, I’m doing this.’ And like my whole thing is, like just go then.

“Like stop going back and forth or like you say you’re going to do this, it’s like you can do — everybody’s entitled to do what they want, you know what I mean?”

Masters tier rankings: Can Tiger win if he plays?