Richard Forsyth spends more time at Royal Melbourne Golf Club than he does anywhere else.

The course's superintendent, or chief groundskeeper, and his 44 staff spend their days curating and refining one of the highest-ranked golf courses in the world.

Since finding out about it in 2015, Forsyth has been slowly building the track's condition towards its pinnacle for next month's Presidents Cup. 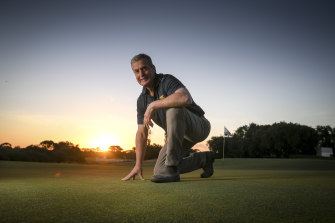 And while the first ball being hit between the formidable US team and their International opponents – led by three Australians – will be exciting, it won't compare to the week Forsyth had 12 months earlier.

But they weren't going to travel halfway around the world without spending some one-on-one time with the man behind Australia's most talked about fairways and greens.

First it was Els, then Tiger three days later. They jumped in a golf cart and drove around the course, assessing each hole's intricacies.

"I spent a similar amount of time with both of them, but Tiger's entourage was a bit bigger than Ernie's," Forsyth chuckled.

Starting his career as the apprentice greens keeper at Riversdale Golf Club in the early 1980s, Forsyth also worked at Yarrawonga, Murray Downs and fellow prestigious sandbelt club Metropolitan before moving to Royal in 2009.

Forsyth is the person who will decide the make-up and presentation of Royal Melbourne's famous composite course for the highly anticipated tournament, featuring some of the best players in the world.

"They were both of the view that the course should be presented and play as it always does, in the traditional way," Forsyth told The Age. 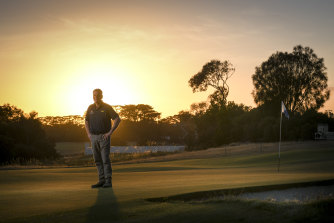 Forsyth ad his staff have been hard at work for months getting the course just right for the Presidents Cup.Credit:Eddie Jim

"That means generally firm and bouncy, not a lot of rough, not narrowing fairways in and that sort of stuff. There was no suggestion from either of them that anything should be changed, so that was pleasing."

So how much say do the captains get in how the course is prepared?

Although it's never been an official edict in cricket, the historical unspoken agreement has been that the curator should prepare a pitch for the home team.

Australia's fast bowlers would drool over the extra bounce of a WACA pitch, England reveled in more grass on their pitches, while India would try to baffle the touring side with as much spin as the pitch could muster.

It's not dissimilar for Forsyth. In fact, it's far more public.

"If the International team wanted something different you'd have to give them a hearing because that's part of the arrangement," Forsyth said.

"It's happened previously in Ryder Cups and Presidents Cups where the Americans hit it a long way so they probably don't want much rough.

"Whereas the Europeans in the Ryder Cups the last time 'round were keen to tighten it right up and have some rough and that probably worked in their favour."

Conveniently, the 'home' captain Els wants exactly what Royal Melbourne offers; a comparatively shorter course with greens that can be – at times – impossible to hit and hold.

For the US team, armed with an abundance of big hitters including the powerful Dustin Johnson, the longer the better.

They want holes where they can bomb the driver, hit a wedge straight at the pin and stop it dead.

"Of all the courses around I think Royal Melbourne has stood the test of time, where you can still see the strategy of the design come through.

"If you can land it and stop it dead from any angle then it's going to lose its relevance pretty quickly.

"I always like to watch the shorter holes. That's where you see them change clubs two or three times because they're not sure how to approach it."

One of those holes will be the first on the composite, which plays as the third hole on the west course for the rest of the year.

The 341-metre par-four is viewed by several experts as one of the best holes of Royal's 36.

Some will attempt to drive the green, but most will endeavor to leave their tee shot on the right side of the fairway, leaving a wedge shot in.

The green slopes front to back and left to right, so depending on the pin, the landing of the approach shot will be crucial.

Forsyth marked the 11th hole (first on the east course) and the sixth (10th on west) as other holes to look out for, both as player and spectator.

"From a matchplay point of view it's going to be really exciting and interesting to see how they play those sorts of holes."

The composite course already looks pristine, with Forsyth and his team having worked seven days a week for months on weed control, pest control, bunker maintenance and the upkeep of the famous greens.

Forsyth, whose daily alarm goes off at 4.30am, has another 45 international volunteers coming down under to help him with final preparations, while Royal Melbourne's hidden mini water plant at the back of the range keeps the groundskeepers fully stocked for emergencies.

And while pundits will continue to debate the chances of Els' internationals to somehow match it with the might of the United States, Forsyth couldn't be blamed for thinking he's already won.

A day each driving Els and Woods around his own home; what could top that?

"That was pretty interesting and a bit of a privilege that not everyone gets to do," he said.

"They're really invested in the event, there's no doubt about that. You couldn't get two better golf representatives to have as captains.

"It was great to see, it's certainly not just an exhibition run, they're completely committed to the contest."

Nasser Hussain vs Shane Warne in the Grand Slam Challenge