A couple of firecrackers from Rory McIlroy in his first round back as world number one, and an opening statement from Tiger Woods in just about the only tournament of any note that he has never won.

Yes, all seemed right in the golf world once more as the two most charismatic players in the modern game sparkled on a marvellous opening day at the Genesis Invitational.

Amazing what happens when you get all the best players in the world at the same tournament and a classy venue. Funnily enough, no-one among an enthralled gallery at gorgeous Riviera appeared to be too concerned about how far the golf ball travels. McIlroy recovered from a poor start to transform his round with two eagle threes in the space of three holes on his way to a first round 68. Woods, by contrast, was swift out of the blocks with a fabulous front nine played in 31 strokes before cooling off dramatically for a 69.

Woods began with an eagle three and, following a kick-in birdie at the 8th, his delirious hometown gallery, now reasonably well-oiled, broke into a chant that might resonate the weekend.

‘Eighty-three, eighty-three,’ they chorused, referring to the fact that if Woods did finally win this event that he now hosts, it would be his 83rd PGA Tour win, thereby surpassing Sam Snead’s record total set way back in 1965.

A long way to go before that possibility moves properly into view, of course. He will certainly have to drive the ball better than on the back nine, although it did add to the day’s drama, as he made a couple of wholly unlikely pars at the 13th and 15th, before coming unstuck with a bogey at the 18th.

On Friday morning, he’s off at 7-16am, and that will be no picnic for a 44 year old who needs over an hour of physio before each round simply to get his back ready to play. 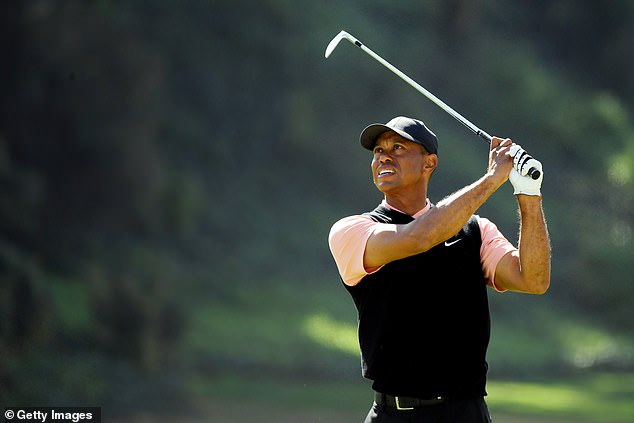 McIlroy was in that slot on Thursday and he reckoned the frigid temperatures early on knocked 40 yards off his drives. ‘I’m delighted with the score because I made such a sluggish start,’ said McIlroy. ‘The two eagles really fired up my round because it was a real struggle to that point. Now I’m looking forward to the rest of the event because this is such a thinker’s golf course.’

McIlroy’s early play certainly matched the cold. As the sun emerged from behind the Hollywood Hills on a picture postcard morning, so the Northern Irishman moved smoothly through the gears.

Starting from the 10th, the clear turning point came at the par three 16th. McIlroy was one over at that point, and in danger of dropping another shot, as his bunker recovery stroke slipped 12ft past the hole. If he’d missed that par putt, he’d have been one of the early back markers. 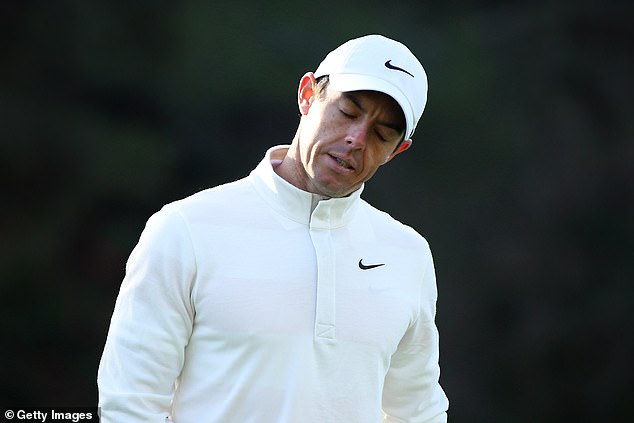 But he holed it, and so walked to the par five 17th tee with a little momentum. It showed with two blows that only a handful of pros can play. A par five measuring a shade under 600 yards, McIlroy’s monstrous drive was followed by a perfectly-struck three wood to the heart of the green, and he rolled in the 35ft putt. Not surprisingly, McIlroy couldn’t resist a little fist pump. Even by his standards, this particular eagle was special.

Not even a dropped shot at the 18th could alter the feeling that this was a round that finally had lift-off. Sure enough, at the par five first and the easiest hole on the course, McIlroy followed another textbook tee shot with a seven iron that made light of a difficult flag location, as the ball finished 6ft away.

Round of the day came from American Matt Kuchar, who shot a startling bogey-free score of 64 that was fully three strokes better than anyone else. Brooks Koepka, the man McIlroy displaced on Monday at the top of the world rankings, showed his intention to regain top spot on Sunday with a 69. World number three Jon Rahm, who could also reach the summit for the first time with a win here, opened with a 70, one more than his playing partner Justin Rose and another Englishman, Paul Casey.

Danny Willett puts improvement in Turkey down to fitness level