Wentworth, England: The BMW PGA Championship has never had any problem drumming up global interest.

This year’s return is no exception. While Padraig Harrington, Europe’s Ryder Cup captain, is using it as the final eliminator for nine players desperate to fill the three wildcard places in his team to take on the USA next month, others in the multi-national field have their own objectives. 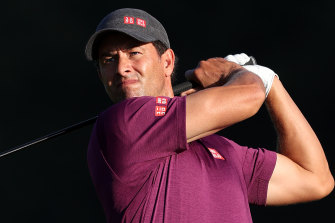 The European Tour’s flagship event has been contested since 1972. Of the four-strong Aussie contingent out to add their names to a long list that includes Rodger Davis (1986) and Mike Harwood (1990), pre-eminent among them is the 41-year-old Adam Scott, ranked 39th in the world and who is showing signs of a return to form with his tied-second finish at the Wyndham Championship in the US last month.

After his challenge at the Open Championship fizzled out in July with a tied-46th finish, Scott had declared himself tired of playing “mediocre golf”, said he could not wait for this season to end so he can get fixed on the next one, and was contemplating moving his playing base from Switzerland to the US to cut down on travel restrictions and focus on adding to his one major title, the 2013 Masters. This week will show if he is progressing after a poor showing last time out, in the Northern Trust event.

The other likely contender is Min Woo Lee, who after a solid season in which he has contested 14 European Tour events, winning the Scottish Open back in July, is holding ninth place in the rankings for the Race to Dubai, the Tour’s end of season money-spinning finale, and can consolidate that with a decent performance over the next four days as only three more of that top 10 are in the field.

The Perth native, ranked No.60 in the world this week, in early July actually started the Scottish Open ranked No.240 in the world and was chasing one of three spots in the Open, securing it at the first play-off hole after shooting six successive birdies from the third for a seven-under 64.
With a US$8m ($10.86m) purse on offer at Wentworth, he can do his cause a lot of good in the challenge for end-of-season honours. 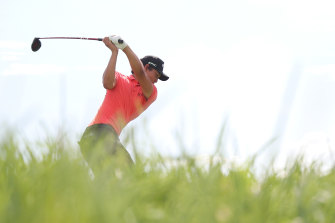 Scott Hend, the big-hitting 48-year-old from Townsville with three European Tour wins to his name, all of them in Asia, will lead the way for Australia, out at 4.50pm AEST and fresh from making the cut at the Italian Open. He has a decent record at Wentworth and last year finished tied-10th when the post-lockdown tournament was played without crowds, and also has a tied-15th and tied-24th
to his name in the event, in 2016 and 2017 respectively.

This week has already been notable for the Queenslander, who had his 99th PCR test in Rome on Sunday and his hundredth in London this week. “Nothing like reaching a 100 on English soil,” he wrote on Twitter.

Scott follows at 5.30pm, matched with England’s Ryder Cup wannabes Justin Rose and Matt Fitzpatrick, while the Adelaide veteran Wade Ormsby, just inside the top 200 and whose best performance in Europe this season is tied 10th at the Cazoo Open in July, is out at 8.30pm.

Min, whose sister Minjee Lee won her first major at the Evian Championship in July, gets started at 9.30pm alongside Christiaan Bezuidenhout of South Africa, whom he played two rounds alongside en route to missing the cut by two shots in the Open, and Calum Hill of Scotland.

And adding to the mix Billy Horschel of the US, the WGC Match Play champion and ranked No.28, is trying to become only the second American since Arnold Palmer in 1975 to lift the trophy.
It promises to be an interesting four days.

Tiger to play alongside Li, Rahm at Masters

The Masters: Rory McIlroy out of contention after another day blighted by mistakes