Golfing lone ranger Cameron Smith has saved Australia from its worst-ever British Open showing after living up to his promise and roaring into contention at Royal Portrush. 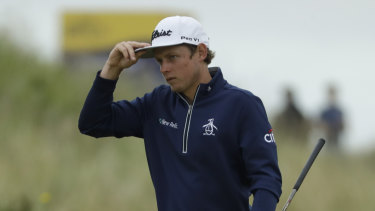 Fuss-free Cameron Smith was the only Aussie to make the weekend at Royal Portrush.Credit:AP

The 25-year-old will enter the weekend with a share of fifth place, but without any compatriots to keep him company.

The last time Australia had just one player make the halfway cut was 60 years ago when five-time champion Peter Thomson was the only Aussie to tee it up at Muirfield in 1959.

This year's six-strong contingent was Australia's smallest in 49 years and few could have predicted Smith to be the man to carry the flag.

He'd missed the cut in three of his previous six events, but said he found something in Detroit, where he tied for 29th in his last US PGA Tour appearance before The Open.

"I was maybe a little too technical with my swing and just went back to trying to see a shot and hit it, which has been nice around here. You have to hit so many different shots," Smith said after his six-birdie round. 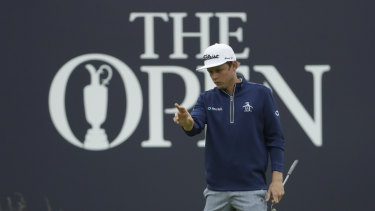 Smith will aim to keep his charge going in the third round.Credit:AP

Scott and Leishman were already out of contention after horror first-round 78s.

Leishman's 72 on Friday left him at eight-over, with fellow former runner-up Scott one stroke further back after a finishing 73.

Rookie Jake McLeod can also pack his bags despite backing up his opening five-over 76 with an even-par 71.

After a nightmare 83 on Thursday, Dimi Papadatos – also making his major championship debut – returned a respectable 72 to finish at 13 over.

AUSSIES AT THE BRITISH OPEN