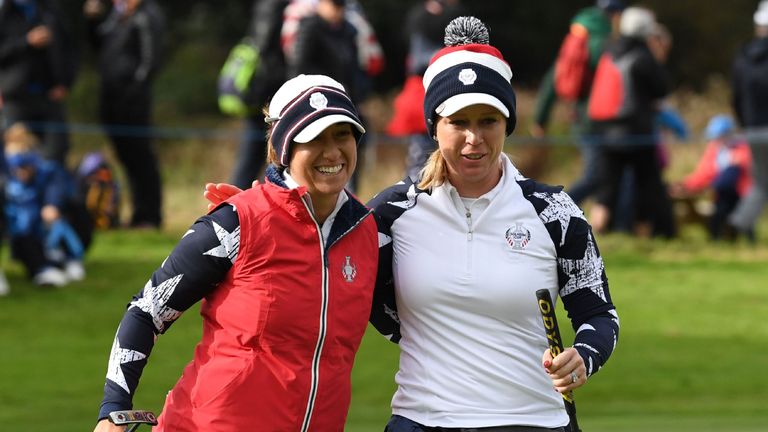 A match-by-match review of the second day of the 16th Solheim Cup at Gleneagles as Europe held onto a one-point lead after Saturday morning’s foursomes.

A dramatic collapse from the European pair saw the Americans snatch a victory in the top match that appeared highly unlikely when they were four down after six holes.

A par at the second was good enough to put Europe ahead and Nordqvist then birdied the third before a poor par putt from Alex at the fifth saw USA slip three down.

A superb tee shot from Van Dam enabled Europe to go four up at the sixth, but the turning point came at the seventh when the home side looked set to go five up, only for Alex to hole a par putt from the edge of the green before Europe three-putted after Van Dam hesitated over her shortish par putt due to an oscillating ball. 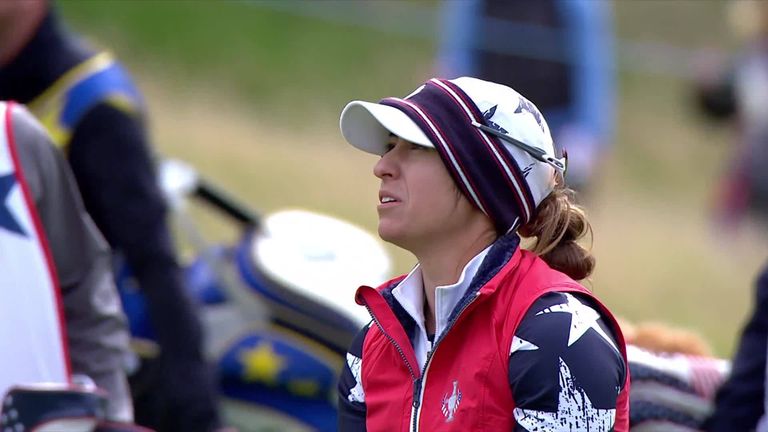 The hosts’ lead was down to two after Van Dam found water with her second shot at the ninth and an excellent tee shot to eight feet from Alex at the 10th meant the USA were only one down.

It was all-square after the 11th after Europe failed to get up and down from a greenside bunker and the Americans were remarkably ahead thanks to their fourth successive birdie at the 12th. They doubled their advantage immediately at the 13th and a par at the 15th took them three up, before Europe briefly stopped the rot by winning the 16th.

However, a par at the 17th proved to be enough to seal a memorable success for Pressel and Alex. 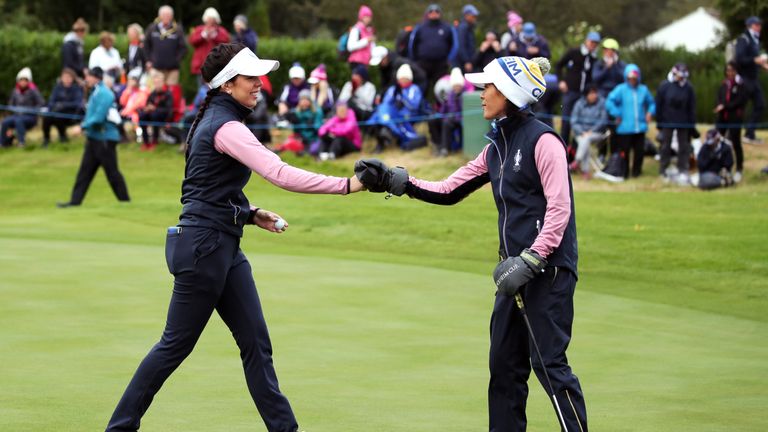 Hall and Boutier made it two wins out of two in the foursomes with a comfortable victory in a match that failed to spark.

Salas, wrapped in several layers in a bid to combat the cold, handed Europe an early advantage at the third when she failed to salvage par and Hall holed out to go one up.

Neither pairing made a birdie on the front nine as nine of the first 10 holes were halved, but Europe made the decisive move thanks to back-to-back birdies at the 11th and 12th, the first from Bouttier and the second courtesy of a perfectly-judged putt by Hall.

Hall missed a tiddler at the 13th to give the Americans a glimmer of hope, but she made amends at the 14th to restore the Anglo-French combination’s three-hole cushion, which they maintained as they wrapped it up at the 16th. 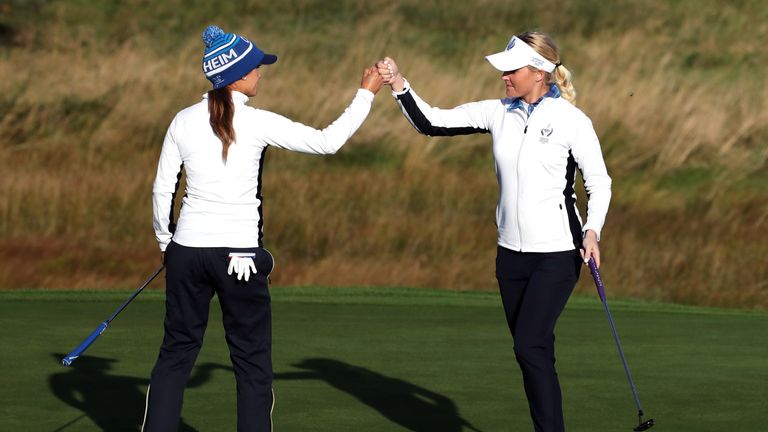 Hall and Munoz put the disappointment of their late collapse in Friday’s fourballs behind them with another comfortable success after taking a firm grip on the contest early on, going three up after three holes.

Khang missed a par putt on the first after Hull had managed to make her four and Munoz then holed from six feet to win the second for Europe, with a par at the third good enough to take them further clear.

The Anglo-Spanish pairing went four up with a bogey at the eighth after Kang failed to get out of a bunker and Hull sneaked in a putt at the 10th to put them five ahead.

Khang missed a six-footer for a half at the 11th, although she made amends by chipping in at the 12th to give the USA their first hole of the match. 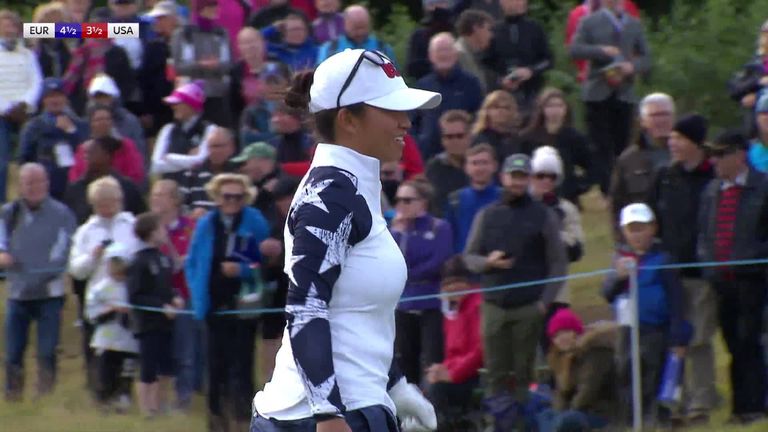 The Americans were only four down when Hull misread a par putt at the 14th but there was to be no more late misery this time as a par at the 14th secured them the victory. The Korda sisters continued their unstoppable form in the foursomes as they put an out-of-sorts Ciganda and Law to the sword.

Missed putts from Law at the opening two holes allowed the Americans to take command, although Ciganda halved the deficit by holing a 15-footer at the fourth, only to miss from four feet as the fifth was halved in bogeys.

Law spurned another opportunity to level at the sixth and that was more-or-less the end of the Europeans’ challenge as the Kordas went two up at the seventh after Ciganda missed a 20-footer for the half.

Further wins at the eighth, 11th and 12th saw the Kordas move five up and a birdie from Jessica at the 13th gave them a 6&5 victory.