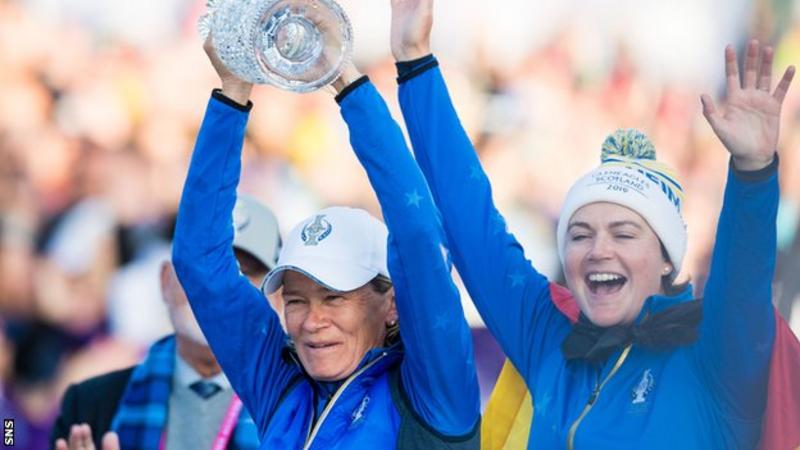 Catriona Matthew has been given the chance to retain the Solheim Cup after being chosen to captain Europe for the second time in succession.

The 50-year-old Scot led her team to victory over the United States on home soil at Gleneagles in September.

She will be captain again at Inverness Golf Club in Toledo, Ohio, in 2021.

“Winning the Solheim Cup in Scotland was a dream come true, but backing that up with a win in America would be even better,” Matthew said.

“It’s always harder to win on US soil, but I’m honoured to be tasked with the mission. I was lucky enough to be part of the first European team to win on US soil at Colorado Golf Club in 2013 and so know what’s possible.”

That remains the only time Europe have won in the United States and it was also the only time they have retained the trophy, which has been won by the US in 10 of the 16 meetings.

Matthew was part of a winning team three times in her nine appearances as a player, including the side who won at Killeen Castle Golf Resort, Ireland, before defending the trophy.

With Meg Mallon having succeeded Rosie Jones as captain in 2013, Matthew would become the first to lead Europe to successive wins should she repeat September’s success.

“The American team played extremely well at Gleneagles, but what we accomplished this year and what it meant to people all around the world will serve as further motivation,” the Scot said.

“I’m excited to get down to business, build the next team and see what Europe is capable of at Inverness Club. It’s a very Scottish name, so I’m hoping that’s a good omen.”

The appointment was announced by the Ladies European Tour at the scene of September’s win, with Matthew saying that the event was the pinnacle of her career, even “blowing away” her major victory in the 2009 Women’s British Open.

Dame Laura Davies, a vice-captain in 2019, said: “I think that Catriona was such a great captain that she deserves the chance to go and get the trophy back again.”

Suzann Pettersen, who holed an eight-foot putt to win on the 18th green in the final match at Gleneagles, was also “thrilled” by the news.

“She’s a class act and obviously inspires all the players and team members around her,” she added.

“She’s not only a Solheim Cup legend but she’s also a great leader, friend and mother. She had the faith in me to choose me as a wildcard pick, for which I will forever be grateful, and she deserves all the credit.”

The only other Scot to captain Europe, Dale Reid, failed in her attempt to retain the trophy in Minnesota after leading her side to victory at Loch Lomond in 2000.