John Daly required emergency surgery after being bitten by a spider while holidaying in England last week.

Daly, 53, developed a major abdominal infection as a result of a bite he was unaware of until back in the United States and was taken by ambulance to Uniontown Hospital, Pennsylvania. 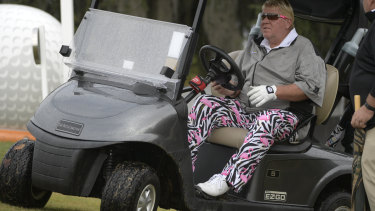 "Was in England last wk & incurred a spider bite, not really knowing it," the 1995 Open champion wrote.

"Fast forward to Friday, mouth/mouth, compressions & unknowingly now in an ambulance rushed to ER all while on family vacation & straight into surgery! Removing what developed into a major infection in my abdominal area & treated for early sepsis all from a brown recluse!

"Not just knee pain now but abdominal pain but Prayers to the big man above I'm alive. Spiders are NO JOKE!"

The news puts Daly's participation in next week's Open at Royal Portrush in further doubt after the Royal and Ancient said it would refuse his request to use a buggy at the tournament due to arthritis in a knee.