Sydney is expected to miss out on hosting the first LIV Golf event in Australia with Greg Norman’s Saudi-backed tour favouring a shift away from both NSW and Victoria.

Despite being considered the early frontrunner to welcome the controversial new league to Australia, sources familiar with the situation said Sydney won’t be the choice for Norman’s series.

Norman’s LIV executives had visited several courses in the harbour city including The Lakes and Stonecutters Ridge in Sydney’s west, but will bypass Australia’s largest capital city for its first foray into Australia.

Adelaide has emerged as a leading contender to host the LIV event, which will feature a $35 million purse and the likes of Australia’s The Open champion Cameron Smith, compatriot Marc Leishman and major winners Phil Mickelson, Dustin Johnson, Bryson DeChambeau, Brooks Koepka and Sergio Garcia.

South Australian premier Peter Malinauskas has made an aggressive pitch for Norman to bring the LIV event to Adelaide, with Grange Golf Club a leading candidate. Norman helped re-design the course almost a decade ago.

“I haven’t seen much evidence of the US PGA doing Australian golfing supporters any favours recently,” Malinauskas said last month. “I think it’s about time golf had a bit of a shake-up. So to that end, I wish LIV Golf all the best.” 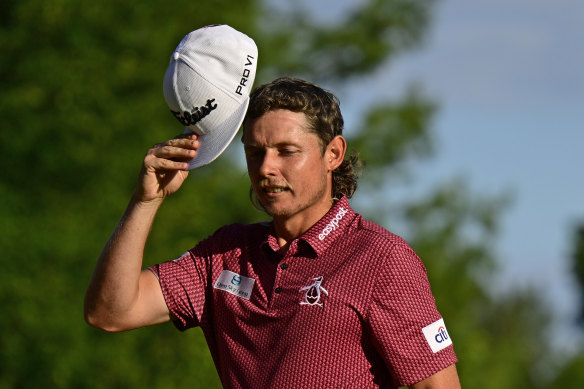 Cameron Smith will headline the LIV Golf event in Australia next year.Credit:Getty

Norman has also scouted out his home state of Queensland as a potential landing spot for the Australian event, which is likely to be held in April and will be part of a global league which takes players across the world in 2023.

NSW sports minister Alister Henskens said last month Sydney was “ready and willing” to discuss the potential of bringing more topline golf events to the state, but they have missed out on hosting the new upstart series.

Sydney has also ceded hosting rights for the Australian PGA (Royal Queensland) and Australian Open (Kingston Heath and Victoria) this summer, making a play for a LIV event appealing.

The Herald revealed only one prestigious Sydney course, Royal Sydney, opted not to entertain LIV executives when they arrived in the country recently.

Adelaide has also been left without a major golf tournament after the women’s Australian Open was confirmed to be played alongside the men this year. The event had been played in South Australia since 2016.

The next LIV event will be played in Thailand this week where world No.3 Smith will start favourite to notch back-to-back wins after being successful in Chicago last month.

His world ranking is expected to plummet in coming months given LIV has yet to be granted official status by the governing body which oversees the rankings system.

Smith and Leishman will head up an Australian LIV franchise next year where they are expected to get significant support Down Under.

Former Masters champion Adam Scott has defended the league despite staying loyal to the PGA Tour, saying LIV Golf “was not just pure evil” and he supported Smith and Leishman for taking an opportunity to join Norman’s concept.

LIV Golf is funded by Saudi Arabia’s public investment fund and has been criticised as an exercise in sportswashing to improve the kingdom’s image in the wake of its human rights record.

From Amen Corner to a security guard, the most memorable moments from Tiger’s 2019 Masters win