The slump is only getting worse for New Zealand golfer Lydia Ko.

The former world No.1 has missed the cut in her past two tournaments, most recently at the Women's British Open, doesn't have a top-five finish this year and hasn't won a tournament since April, 2018.

According to her former coach, the problem lies with Ko's parents. 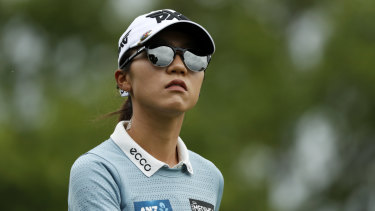 Lydia Ko during the Women’s PGA Championship in June.Credit:AP

"Her parents have a lot to answer for – a case of unbelievable ignorance," David Leadbetter said earlier this week to New Zealand's Radio Sport. "I'm angry, I'm sad because to me I know what she's capable of doing. And to see her play like this, it's just very sad to see."

Leadbetter coached Ko, a 22-year-old who emigrated with her parents from South Korea to New Zealand when she was a child, from 2013 through 2016. She had already established herself as a phenom by winning a professional event in 2012 at age 14 and later that year she became the youngest person to win an LPGA event.

By the time she and Leadbetter parted ways, Ko was the winner of 19 events, including two majors, and she attained the world's top ranking before she turned 18. Since then, though, she has just one LPGA Tour victory.

At last week's British Open, she shot 76-80 to finish 12-over-par miss the cut by 11 strokes, beating only one player in the entire field. She is currently No.24 in the LPGA rankings, with four top-10 results.

"She had a phenomenal start to her career, probably a greater start, for me, than Tiger Woods, when you look at it from the number of tours she's played and her win ratio and major win ratio," Leadbetter said.

He pointed to several changes Ko has made, including with her coaches, caddies and equipment. Leadbetter said he would be open to returning as her coach if she were "in full control of what she was doing".

"It really is a very sad situation to observe," Leadbetter said. "Her team have to be thinking that they have made some huge mistakes, taking an unbelievably talented player and turning her into ordinary. I hope she gets it back but restoring confidence is never the easiest thing to do."

Shortly after he was fired in December 2016, Leadbetter warned of what he saw as overbearing behaviour from Ko's parents. 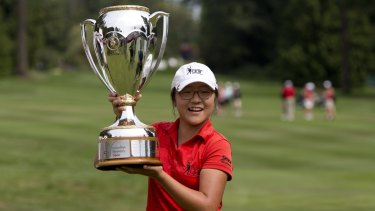 Ko winning the Canadian Women’s Open as a 15-year-old back in 2012.Credit:AP

"They tell her when to go to bed, what to eat, what to wear, when to practise and what to practise," he said at the time via Golf Digest. "And they expect her to win every tournament. They are good people, who love their daughter and want the very best for her, and Lydia has never been to college and is still young. But they are naive about golf.

"And at some point," he continued, "they've got to let the bird fly from the nest. I would often think, 'It's not easy coaching three people'."

Leadbetter himself has been accused of starting Ko's downturn by tinkering with her swing.

Leadbetter "completely changed the DNA of her golf swing," analyst and former PGA Tour player Brandel Chamblee told ESPN last year. "Why in the world would you do that? Because you want to put your stamp or signature on the masterpiece that is this kid?"

In February 2016, before the break with Leadbetter, former LPGA Tour player Paige Mackenzie also commented on Ko's alterations to her swing mechanics.

"This time last year she was working on changing from a fade to a draw and now we're continuing to see changes within her golf swing … this looks like part of David Leadbetter's new A-Frame method of teaching, but it's scary to be in that much of a different position in your backswing than you were prior."

"But in the end, if I'm making any decision, whether I'm going to shop or change caddies or change coaches, I'm always going to talk to my parents about it," Ko said. "No matter what, I'm going to ask them. If it didn't feel right, I wouldn't have done it. I believe in my decision. I have no regrets."

Ko said in May that she did not expect such early success and now finds herself compared to those days.

On Tuesday, Leadbetter called Ko "a tremendous person" but reiterated that he thought she needed more independence.

They tell her when to go to bed, what to eat, what to wear, when to practise and what to practise.

He continued: "She's not a 12-year-old anymore. So they need to let her go, let her fly, let her leave the nest so to speak and find her own way. If she can do that, I mean yeah we could see Lydia back."

He said he would advise Ko to take a break and stop playing in tournaments for the rest of the year.

"Sometimes you've got to take a complete break from the game," he said, "get your mind rested, get your body rested and then [come back] and play next year."