Having tamed Torrey Pines eight times before, Tiger Woods has not given up hope of another US PGA Tour victory despite falling away from the leading group after day two.

Woods shocked the galleries on the first hole at the South course on Friday when he hit a solid approach shot to 25 feet, but four-putted for a double-bogey six. 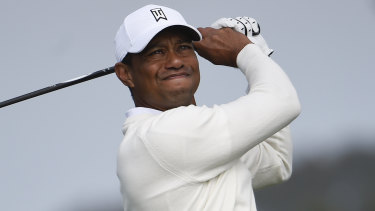 "I tried to ram it in the hole and it bounced, and obviously I hit a terrible third putt; pulled it," Woods said at the Farmers Insurance Open.

But the 15-time major winner fought hard to pick up a stroke with a 71 that left him at four-under-par and six shots off the pace.

American Ryan Palmer came from the clouds with a sizzling 62 to top the leaderboard at 10 under, two shots ahead of former event winner Brandt Snedeker (67).

Like Woods, Day has not given up hope as he eyes a third win in five years at Torrey Pines.

"Torrey Pines (South) is a golf course that exposes your weaknesses."

Woods has made the San Diego course one of his happiest hunting grounds, winning the regular US PGA Tour event there seven times, as well as the US Open in 2008.

He said he would draw inspiration from his first victory there, in 1999, when he was nine shots behind after 36 holes.

The notoriously difficult South course was the longest on the PGA Tour last year and has been lengthened 67 yards to now measure 7765.

In five of the last seven editions of the event, the winning score in relation to par has been worse than the 36-hole total.

That stat is not lost on Woods.

"If you make the cut on the number here, anything can happen on the South course," he said.

After Leishman and Day, next best of the Australians are Cameron Smith (71), Cameron Percy (73) and Cameron Davis (65), all at three-under.

John Senden (eight over) was the only Australian to miss the cut, but high-profile early exits included Rickie Fowler, Justin Rose and Phil Mickelson.

'Why would you play over there?' – Rory McIlroy brands European Tour a 'stepping stone' after switching focus to PGA circuit