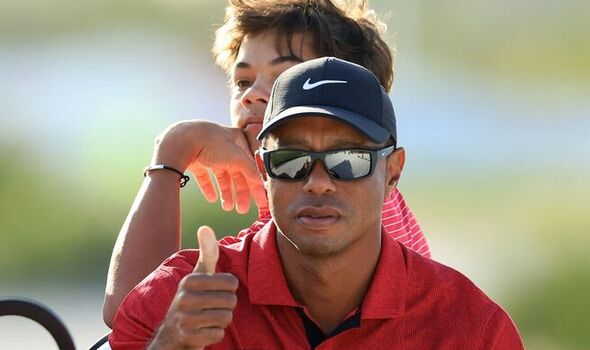 Tiger Woods has spoken about the ‘hard’ injury challenge he faces preparing for a televised return this weekend alongside Rory McIlroy. The 15-time major champion is fit enough to compete in ‘The Match’ exhibition event, but getting around the course is an issue and he will need a buggy to take him between shots.

The 46-year-old is still suffering from injuries sustained in an horrific car crash in 2021 and last competed in a televised event at The Open championship in July. The golf icon was forced to pull out of last week’s Hero World Challenge with a foot injury and has now given a fresh injury update.

Woods said: “I can hit golf balls. It’s just hard getting from point A to point B, so (the buggy) will certainly help a lot. I’m able to hit golf shots but being in a cart is a totally different deal. That’s something I’ve done at home at Medalist quite a bit.”

The shortened exhibition will see Woods compete alongside world No.1 McIlroy over 12 holes under the floodlights in Florida. The pair will be competing against US Ryder Cup stars Justin Thomas and Jordan Spieth in the televised exhibition.

The best ball format will take the pressure off the golf star as each player plays his own ball and the lowest score of the two players on each hole is used as the team score. Woods is still managing the plantar fasciitis foot injury which forced him out of last week’s Hero World Challenge, which he hosted.

“When I was trying to gear up and be able to play in the Hero and see if I could actually do it, the walking part was the challenge, it wasn’t actually swinging,” Woods added. “I’ve got to get this plantar to heal, and that just takes time.

“It’s not something that happens overnight. It’s going to take a lot of rest and healing and unfortunately treatment. It’s a tough road (for) anyone who has ever had it.”

Woods is also likely to need a golf buggy when he plays alongside son Charlie at next weekend’s PNC Championship in Orlando. Woods Jr will be keeping a close eye on his father’s playing partner on Saturday after the 13-year-old was told to model his swing on McIlroy’s.

The Masters: First-round groups and tee times at Augusta National

Paul McGinley insists Rory McIlroy will NOT win the Masters