Justin Thomas and Patrick Cantlay drained match-deciding birdie putts and a nerveless Rickie Fowler squared the last foursomes contest of the day with a short knee knocker as Tiger Woods' team rose from the canvas. 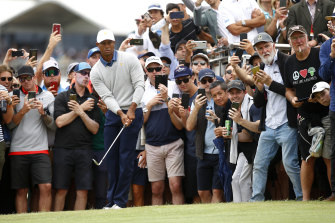 Tiger Woods is watched by a packed gallery at the Presidents Cup on Friday.Credit:Getty

Woods has opted to sit himself out of Saturday morning's fourball contests – despite being his country's best player across the opening two days – after the United States and International teams split the points from Friday's five foursomes matches.

But it could have been so much better for Els' underdogs as they led in all five matches on the back nine on Friday, but yielded ground in the final hour as Woods' men set up an intriguing weekend.

"Sometimes it bites you," Els shrugged. "Put a spear in it and bite back.

"Saying that, we're in the lead. The Americans played wonderfully on the 18th hole and all credit to them.

"My guys learnt a lot from [Friday] afternoon. We won't make this happen again. But saying that, they played great; birdies, great shots, and that's why they are champions."

Woods and Thomas won their second straight match after the world No.4 drove a dagger into the impressive Hideki Matsuyama and Byeong-Hun An on the last hole, sparking a wild celebration between the American pair.

Thomas had shown Woods and his United States teammates a video of former NFL star Terrell Owens on the bus trip to Royal Melbourne, triggering an exchange with his playing-captain. 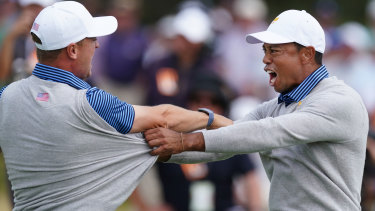 Back in it: Tiger Woods and Justin Thomas celebrate their victory on Friday.Credit:AAP

"There's a video of Terrell Owens and he yells, 'I love me some me'," joked Thomas, who will combine with Fowler in the opening foursomes match on Saturday morning.

"I showed it to the guys [on Friday] morning. They had not seen it. It's a really funny video. I said, 'If I make a big putt today, I'm yelling it'. That was a pretty big putt so I thought it was the appropriate time to yell it.

Els' team flirted with what would have been a monumental lead, but still took heart from an improved showing in the foursomes format which has been an achilles heel for their success-starved side.

"Look at the record we've had in the foursomes the last 25 years for us to come out two-and-a-half [to] two-and-a-half in the session is like a win for us," Els said. "We would have taken that at the start of the day."

Said Woods: "It looked pretty bleak, but the guys turned it around. They played phenomenal coming in. It was important for us to end the way we did and it totally changed the last hour."

The International charge on Friday was led by the Australian contingent, triggering an increase in crowd noise from a huge Royal Melbourne throng.

Cameron Smith and Sungjae Im lost two of the final three holes, but still halved their match with Gary Woodland and Fowler. Els has chosen to sit Smith out of the foursomes matches on Saturday morning.

Told Cantlay thought the United States now had the momentum, Leishman said: "I would probably disagree. It's very early. They were tied – they made a couple good putts on 18 – definitely give them that, but I don't think you get momentum with two putts.

"[But] we know the Americans are going to improve. The jetlag will be wearing off and they will be a hard team to beat still."

Hull, Law and Hall on the prowl at the Women’s British Open