Tiger Woods is bracing for the Presidents Cup build-up to be hijacked by Patrick Reed's rules furore as the man dubbed "Captain America" insisted "nothing is going to get in my way" in Melbourne.

Australian golfing legend Ian Baker-Finch joined the chorus of people warning Reed will cop a savage reception from Royal Melbourne galleries as Woods shied away from the issue becoming a distraction. 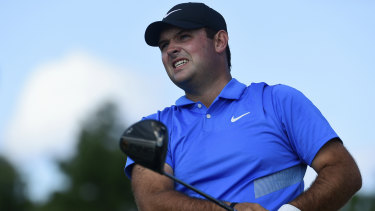 Patrick Reed at the fourth tee during the final round of the Hero World Challenge in Nassau, Bahamas, on Sunday.Credit:AP

Reed was given a two-shot penalty for improving his lie in a bunker during the third round of Woods' Hero World Challenge in the Bahamas, eventually finishing third and two shots behind Henrik Stenson.

Asked about the Reed controversy and the ramifications in Melbourne, Baker-Finch said: "I don't think he'll be getting a very good reception. We didn't even give our guys after the cricket [sandpaper] debacle much slack and they are our own team so I can only imagine what it will be like next week."

Australian supporters group The Fanatics is expected to be on the course at the Presidents Cup, a format desperate to find a new lease of life as the International side has toppled the United States only once in its history.

"The Fanatics are already thinking of things to be singing," said Baker-Finch. "It was pretty ordinary to do that (improve his lie) – and to then be caught and not own up I thought was a bit strange. I don't think they'll be kind to him, put it that way."

A day after International star Marc Leishman described Reed's actions as "pretty ordinary", Reed insisted the issue would not detract from his Presidents Cup performance.

The former US Masters champion has forged a reputation for thriving in team-based formats such as the Ryder Cup and Presidents Cup, earning himself the "Captain America" moniker.

"There's not really anything that's going to be said or done that's going to really derail me … especially next week," Reed said. "I'm playing with my team and for the whole country and at the end of the day nothing's going to get in my way."

Woods and the United States team will arrive in Melbourne on Monday before both teams front a press conference later in the afternoon.

"Of course we're going to be asked," said 15-times major champion Woods about the Reed incident. "But when it comes right down to it, we'll just get ready to play, and play. Whatever [comments] Patrick has put out there, he's focused like he is in every Cup. He just goes out and gets his point. Next week will be no different."

Woods is expected to play the majority of matches across the four days, which will include a mix of fourball and foursomes from Thursday through to Saturday. Twelve singles matches will be played on Sunday.

"I think he'll be huge," Baker-Finch said of Woods. "There's already talk it might be the last time we get to see him here. Everyone's going to want the International team to beat the American team, but they still want to watch their stars. They'll be 10 deep whoever Tiger plays with. He seems to be in good form.

"I think they'd all be happy to play him. I think it would be great if our leading player, no matter who it is throughout the week, gets to play him on Sunday."

The Players: Dustin Johnson faces competition for world No 1 ranking