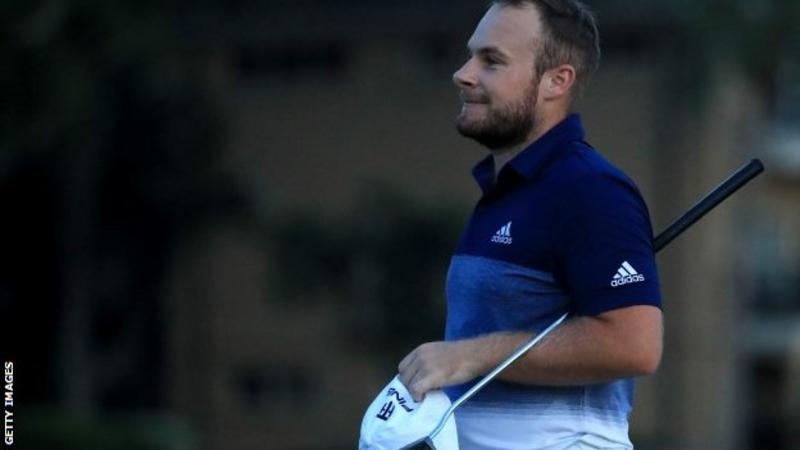 Simpson carded a bogey-free 64, holing five birdies in the final seven holes, to win on a tournament record 22 under.

Abraham Ancer shot a 65 as he finished second on 21 under at Hilton Head.

Englishman Hatton, who shared the lead after round three with Simpson, Ancer and Ryan Palmer, had four birdies on his front nine as he finished 20 under.

American Daniel Berger, who won last week at Colonial, had three birdies in his final four holes, including a chip-in two on the par-three 17th, as he shot a six-under 65 to join Hatton in third.

It was a thrilling final day at the Harbour Town Golf Links course despite the PGA Tour’s second behind closed doors event finishing around three hours behind schedule because of a storm on the South Carolina coast.

At one point six players shared the lead but Hatton, who won the Arnold Palmer Invitational in March – the last PGA Tour event to be completed before the coronavirus hiatus – jumped clear to lead on 19 under with four birdies in five holes from the second.

However, he was unable to build on that momentum, parring the next five holes and then trading a birdie for a bogey on the 12th and 13th, before picking up his final shot on the 16th.

Ancer, who did not miss a green in regulation in the final round, also picked up four birdies on the front nine to reach the turn at 19 under. Further birdies on the 15th and 17th left him needing another on the last to force a play-off but, with darkness descending, he was unable to hole a 37-foot putt.

That left Simpson, a dad of five, to celebrate his second victory on Father’s Day. His first came in 2012 when he won the US Open, which traditionally finishes on Father’s Day and had been scheduled to be played this week before the coronavirus pandemic hit.

“It was a crazy day,” said 34-year-old Simpson, who also won in Phoenix in February and is set to jump up to fifth in the world rankings on Monday.

Ian Poulter, who led after round one, closed with a 68 to finish on 16 under, alongside fellow Englishmen Justin Rose (65) and Matt Fitzpatrick (68), while Northern Ireland’s world number one closed with a 70 and 11 under total.