Play at the Rose Ladies Series Grand Final has been suspended due to a fire at Wentworth.

The emergency services are currently at the famous course in Surrey – and play will not resume until 9.30am on Saturday. The fire started on Chobham Common and nearby Sunningdale golf course has also been closed, with strong winds whipping up the fire.

Jamie Weir of Sky Sports News was at Wentworth and said: “We have been told to evacuate the area. The fire is heading towards the 12th hole here at Wentworth on the West Course. “The one good thing is that a golf course does have irrigation systems and sprinklers in place, so they can put out the fire. They think it might be skirting up the perimeter of the course but they are not anticipating it being too big a problem.

“The fire service are on the scene as are the police.”

English pro golfer Felicity Johnson said: “As were playing the ninth, we could see the smoke in the distance but it seemed to get closer pretty quickly. We were waiting on the ninth green to see what was happening and then [there were] some flames – and you could hear it, the noise of it. 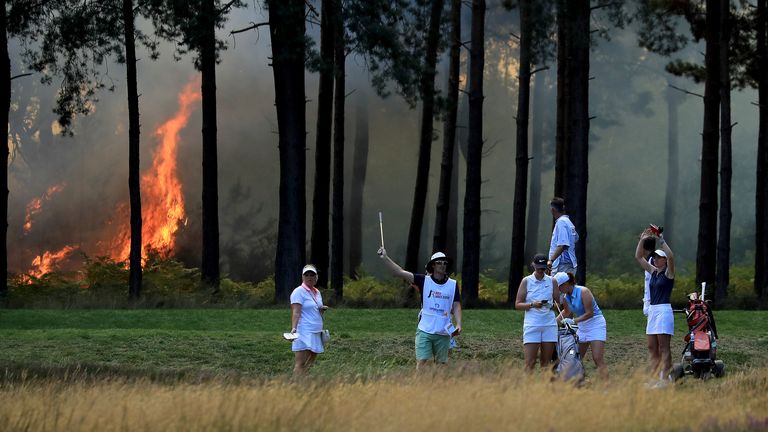 “It is pretty scary when you suddenly see flames and then hear them. We all know how fast fire can travel so it was pretty scary for a moment there. We just had to stay at a safe distance and hope it could be brought under control.”

Alice Hewson remained on course to claim overall victory as she covered the first seven holes in one under, making her second birdie of the day at the seventh shortly before the players were removed from the course.

Hewson leads the 54-hole finale on six under, two clear of Solheim Cup star Charley Hull, while Series co-founder Liz Young and 2018 Women’s Open champion Georgia Hall are both two under for their rounds and three strokes off the lead.

Tournament of Champions: Tee times for the opening round in Hawaii