Bryson DeChambeau and Justin Thomas suffered surprise defeats on an eventful first day of the WGC-Dell Technologies Match Play, which started with Rory McIlroy being crushed by Ian Poulter.

World No 1 Dustin Johnson and No 3 Jon Rahm both opened with victories at Austin Country Club in Texas, while Poulter was one of only two British players to win the first wave of round-robin matches, the second arriving in the final match of the day when Robert MacIntyre produced an outstanding finish to beat Kevin Na.

McIlroy’s much-publicised swing problems, which have prompted him to start working with new coach Pete Cowen this week, were again evident in the opening match of the tournament, the 2015 champion crashing to a 6&5 defeat to Poulter.

The Englishman went three up after just five holes, with McIlroy pulling his drive at the fifth out-of-bounds and into a swimming pool in the back yard of a neighbouring property, and although McIlroy hit back at the sixth and eighth, Poulter won the next five holes to close out a victory which he insisted was “flattering”.

Rahm held off Sebastian Munoz in a tight 1up win, while Patrick Reed halved his opener against Bubba Watson before Jordan Spieth took care of Matt Fitzpatrick 3&1. 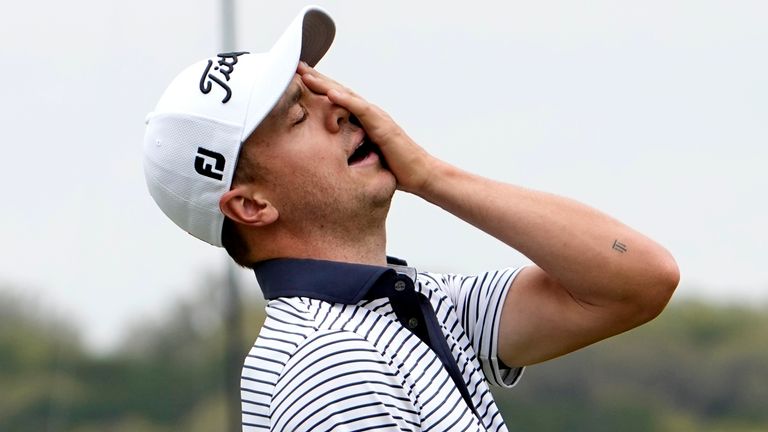 Players champion Thomas, drawn in Group 2 with defending champion Kevin Kisner and 2019 runner-up Matt Kuchar, found himself five down at the turn against the latter and, despite an improvement on the back nine, he could not avoid a 3&2 defeat.

Antoine Rozner then celebrated his Match Play debut with an impressive victory over DeChambeau, who was three down with six to play before rallying down the stretch, reducing the deficit to one hole with wins at the 13th and 16th.

But the Frenchman, who holed a 60-foot birdie putt to clinch the Qatar Masters title earlier this month, held his nerve to halve the 17th in par before a delightful up-and-down for birdie at the last sealed a 2up success. “I was excited because it’s my first WGC. It’s match play, and I haven’t played match play in a long time, so I think I was more excited than curious. It was just a lot of fun. It’s nice to play again in front of some people out here because in Europe we don’t have any crowds yet, so it was a lot of fun.

Tommy Fleetwood made a 10-foot birdie putt on the final green to snatch a half against Si Woo Kim in the other Group 5 encounter, but there were no English victories in Group 8 despite three Englishman being in that group!

Matt Wallace pitched to three feet to set up the birdie at 18 which he needed to tie his clash with Tyrrell Hatton, while Lee Westwood was still showing signs of fatigue as he slumped to a 4&2 defeat to long-time friend and Ryder Cup team-mate Sergio Garcia, who now resides in the area and has the advantage of home comforts this week.

“I’ve always felt like I’ve got great support all over the world and all around the country,” said the Spaniard. “I definitely feel it a little bit more here, now that we’re spending a little bit more time. We’ve made a lot of good friends here in Austin. It’s an awesome city, and it’s nice to go out there and play well, not only for me but for them.” Johnson was taken the distance in his match against Adam Long, while the final encounter of day one produced late drama when MacIntyre upstaged Na with a remarkable run of scoring over the final five holes.

One down after running up a bogey-six at the 12th, the young Scot chipped in for eagle at the 13th, birdied the next to go ahead for the first time, and he then holed out from a greenside bunker to card another eagle at the long 16th before a solid par on the penultimate hole capped a 2&1 win.

“I must say it was one of the best matches I’ve been involved in,” said MacIntyre. “Both of us were playing really well, weren’t giving an edge. I hit a decent shot on 12 and it went in the water, and then just the last five holes just we both started going crazy.

“I chipped in when he’s knocked it in tight, and it just kind of fed from that. The confidence was there on my game all day, and I just continued to just commit to the shot, and it paid off at the end.”