We’ll get to Cam Smith and LIV Golf in a sec.

But first let’s go to the autumn of 1995 when, within the space of three months, a full-blown civil war broke out in both rugby union and rugby league. In both codes the traditionalists were under siege from canny revolutionaries firing cannons armed with money. The traditionalists had no choice but to gather their own backers and return fire.

In both codes, the key matrix of victory was who could get the most superstars.

When Super League split from the ARL, and they were heading to dual competitions, it was hugely important to both sides to get the best player in the game. And that is why the Canberra Raiders’ Bradley Clyde went overnight from a salary of $150,000 a year to $750,000 playing Super League. It was paid to him not just for his verve, his swerve, his tackling and try-scoring ability – but because whichever comp could boast Bradley Clyde could boast credibility.

During the 1995 World Cup, Rupert Murdoch sealed a deal with the New Zealand, Australian and South African rugby unions, for $555 million dollars over 10 years for the broadcasting rights, which turned the game professional. Kerry Packer, however, went after the players themselves, offering them a fortune to join his “World Rugby Corporation”. 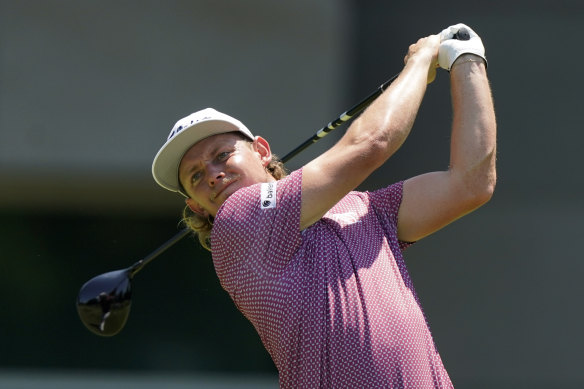 Cameron Smith has reportedly been offered well in excess of $100 million to become LIV Golf’s highest-profile signing to date.Credit:AP

It briefly looked like union would go the way of league and have two comps.

Who was the best player to go after?

No one had any doubt.

On the afternoon of June 18, 1995, Rupert Murdoch was in London and watching closely on the TV when the World Cup semi-final between New Zealand and England took place in Cape Town. Playing on the wing for the All Blacks, Jonah Lomu – “a freight-train in ballet shoes” as I described him – single-handedly destroyed England. He touched the ball just seven times. He crashed, he danced, he span, he stepped, he scored! Again and again and again – four tries!

“It’s the most electrifying thing I have ever seen,” Chisholm replied.

And they got that guy. When I wrote a book on the Rugby War, I could never lock down exactly how much Lomu got, but it was likely well north of a million dollars a year. (In Kiwi dollars that is just south of a squillion) Again, it wasn’t just for his try-scoring ability. It was because whoever’s competition had Lomu had credibility, and it was worth paying crazy money for.

Enter our own Cam Smith into the current war between the US PGA and LIV Golf. LIV doesn’t boast a single golfer in the top 15 in the world, and is made up for the most part of a mixture of famous names well past their prime – see Bubba Watson, Phil Mickelson et al – and a bunch of also-rans.

But if they had Cam Smith, current holder of the British Open and crowd favourite around the world? What would he be worth?

Well, they say about $130 million. And the tragedy is, he’s probably already signed up to it, but we’ll get to that, too.

Clyde and Lomu went on to live happily ever after – alas, in the case of Lomu, not for long enough – and both codes actually emerged stronger for the fight. Neither Clyde nor Lomu had to toss and turn at night, wondering if the money they took actually damaged the game they loved. 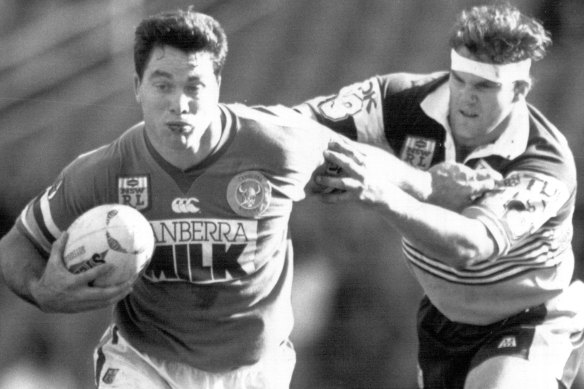 When the Super League war was at its height, Bradley Clyde was among the signatures most sought after.Credit:Simon Alekna

In both codes, full professionalism had the same effect that Packer’s World Series Cricket had on the traditional game. It brought it into the modern age, remunerated the players properly and gave it televisual oomph and global reach as never before. An even earlier example was Rod Laver leading the professional revolution in tennis in 1962. There were lots of tears, early, but a much better game when the war was over.

Not just like golf. Golf has already evolved to something pretty bloody close to perfection. Does sport get much better than the final day at Augusta? Any more visually spectacular? More sustained drama? A greater sense of history? All with wonderful traditions that go back a century and more? And somehow, the whole thing has got through to the current age without being buried under crass advertising signs painted on the greens, and an endless stream of gambling odds being broadcast at the same time. Somehow, the culture comes complete with players behaving impeccably, reporting their own peccadilloes. 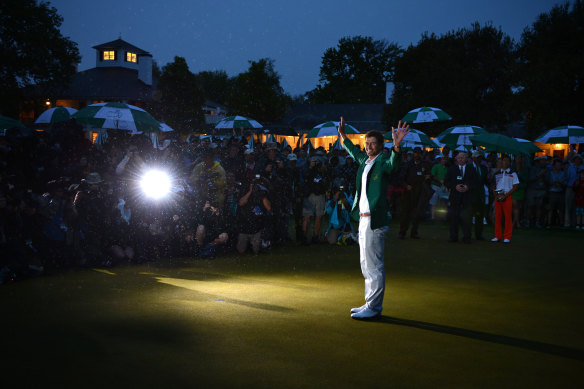 Does sporting theatre get any better than a Masters Sunday?Credit:Getty

Seriously, what does LIV bring to the table in this war, bar blood money?

For this is the thing. In this sporting war, the traditionalists not only have traditions worth cherishing and fighting for, those traditions are the best part of the schtick of the whole thing in the first place!

Who can hold up the cup once held up by Ben Hogan, Arnie Palmer and Jack Nicklaus? We lean in close. We love it.

I repeat: in this sporting war, the only thing LIV offers is the billions they’re prepared to put out for “sportswashing,” to improve their image. And yes, $130 million is a hard thing for anyone to refuse. For that amount, you could probably make yourself believe – or at least say – anything.

But if you still haven’t signed, Cameron Smith, don’t. You’re a fabulous bloke, who we all love and are proud of. And so I don’t say this just for us, but for you. Look to the examples I proffer above.

All of those sporting revolutionaries took the money, and finished up with a better overall game when the war was over. None of them had regrets.

I think you will.

Everyone, and I mean everyone including you, knows the score on LIV. It’s the money, and no endless blather about it being “good for the game of golf” changes that. LIV is a cancer on an otherwise fabulous sport. You will be their most significant signing. They’re paying you for your cred. You will be blamed for making the monster grow. With the whole world at your feet right now, do you really need to go down in history as the bloke who turned the civil war of golf very uncivil indeed, the one who gave LIV cred – yours?