As if there were not enough big sporting beasts in Japan right now, Tiger Woods has flown in for his first tournament since August, following his latest bout of knee surgery. Straight into a world of intrigue as well.

As captain of the United States Presidents Cup team, does he pick himself for the match against Ernie Els’s International team at Royal Melbourne in December, and so become the first playing skipper since Hale Irwin in 1994?

This week’s event, the inaugural Zozo Championship in Tokyo, will be Woods’ only competitive appearance before he names his four selections in a fortnight. 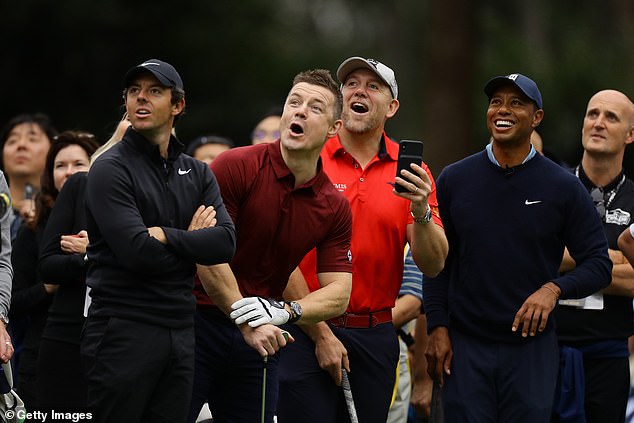 The 43-year-old certainly looked healthy when taking part in a Skins exhibition alongside Rory McIlroy, Jason Day and Hideki Matsuyama on Monday.

Naturally, there was plenty of rust early on, but he was moving far more freely than the discomforted soul we saw at the Open at Royal Portrush in July.

Woods revealed 18 months ago that he wanted to be a playing captain. Back then, with everyone fearing the worst due to his back ailments, he was laughed out of court. He looked a certainty following his victory at Augusta, but more fitness problems led to a summer where he barely played. 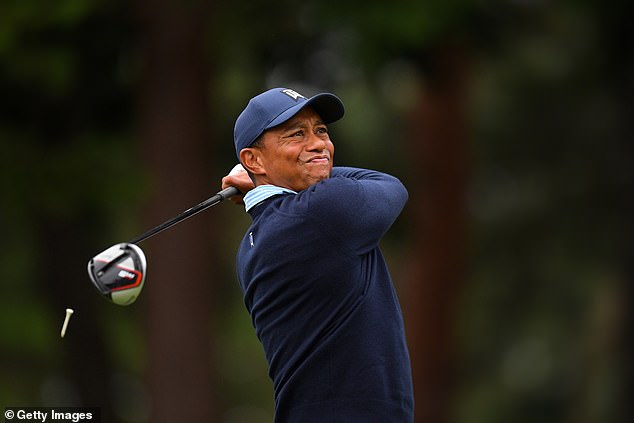 ‘What Brooks said wasn’t wrong. He’s a great guy, he’s super-competitive and I can see where he’s coming from. He’s been the best player in the world over the past couple of years, he’s won four majors, and he didn’t need to remind me I haven’t won one in a while.’

Some thought Brooks Koepka disrespectful when he said he didn’t consider it a rivalry with Rory McIlroy when the recent majors count stands at 4-0 to the American. Responding Rory, wisely, chose to take the high ground.

‘I really don’t want to be in a position where I have to pick myself,’ he said over a year ago. He was more positive about the idea yesterday. Feeling good, and with a green jacket to parade around in, will do that for a man.

But, also looking for picks are the likes of US Open champion Gary Woodland, Tony Finau, Patrick Reed and the newly-wed Rickie Fowler, who all finished above him in the automatic standings.

Asked about his selection dilemma, Woods admitted: ‘During my enforced break, I’ve been consumed by it.’

All of which adds to the fascination regarding a rare autumn appearance, his first in an official PGA Tour event since 2011. Could Woods become the first captain in either the history of the Presidents Cup, or the modern Ryder Cup for that matter, to pick himself? Clearly, it is not just those two momentous semi-finals that are worth keeping an eye on in Japan this weekend.

Five years ago, he was carried high on people’s shoulders after striking a wedge approach to tap-in distance to clinch the winning point at the 2014 Ryder Cup at Gleneagles. This week, Jamie Donaldson is in Portugal, needing to put together a tournament filled with such shots just to keep his European Tour card.

The Welshman, 43, is in 129th place in the Race to Dubai and will need to crack the top 117 to retain his privileges.

Four months ago, following a wretched time with a wrist injury, he said: ‘I can’t even begin to think about what I’d do if I lost my card.’

Let’s hope he manages to conjure up some magic in the final event of the regular tour season. It’s also squeaky bum time in the Algarve for Englishman Lee Slattery, who stands 115th, while three places above him lies Oliver Fisher, returning to the course where, a year ago, he shot the first European Tour 59.

It will need an unlikely outcome to unseat him — but who would have thought the 31-year-old Englishman would return in any danger of losing his card?

One of the most remarkable feats of longevity in sport is in grave danger of coming to an end. You have to go all the way back to November, 1993 to find the last time that Phil Mickelson was ranked outside the world’s top 50. Yes, an unbroken stretch of more than 1,350 weeks. That is truly astonishing, isn’t it? This morning, the lefty is clinging on for dear life in 50th spot.

US Open: Justin Rose one back from Gary Woodland at Pebble Beach