Tiger Woods is off to a solid start in his quest to rewrite US PGA Tour history at the Farmers Insurance Open at California's Torrey Pines.

Woods has returned to the San Diego course where he has won eight times, including the 2008 US Open, hoping to earn an 83rd US PGA Tour win and take the all-time record. 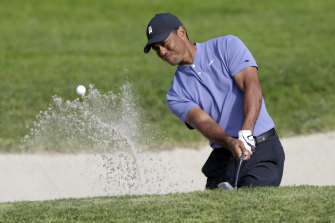 Tiger Woods in action on the North course.Credit:AP

The 15-time major winner gave himself a good chance at doing so with a three-under-par 69 at Torrey Pines' North course to sit three shots behind the lead after round one.

Superstar Rory McIlroy headlines nine players tied at five under and the Northern Irishman can go to world No.1 with a victory this week.

Marc Leishman (North) and Cameron Percy (South) are the top Australians at four under.

Leishman, who has twice been a bridesmaid at the event, battled severe fog at the end of his round to shoot himself into contention. 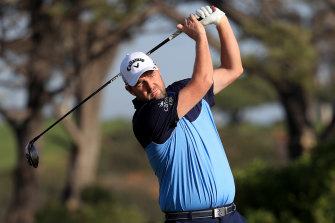 Marc Leishman is in a good position at four-under.Credit:Getty Images

"We could only see 60 metres in front of us," said Leishman, who shot his eighth opening round in the 60s from 12 starts at Torrey Pines to keep his hopes alive of a fifth PGA Tour win.

"My focus level is good and I'm hoping I can keep it up for three more days," said Leishman, who moves over to the South course for the rest of the tournament.

But the 36-year-old knows he will have to drive it long to remain in the mix on the brutish South course, which will host its second US Open next year.

Last year, the South course at Torrey Pines was the longest on the PGA Tour and has been lengthened 67 yards this year to measure 7765.

"My iron play and short game are always my strengths, but if you're not hitting fairways at Torrey Pines, you're not going to contend," he said.

Woods' 69 is his best opening round at the event since 2013, when he won a record seventh Farmers title.

The 44-year-old – who won his last official PGA Tour start and led the American team to a Presidents Cup victory at Royal Melbourne as a playing captain last month – said it felt good to make his 2020 debut with a promising round.

"Oh, I definitely was feeling it. I missed the competition," an excited Woods said.

Woods made two front-nine bogeys but rattled off three birdies on the closing side.

"I felt like I fought back [from the sloppy start] and now there's a lot of positives heading into the South course," Woods said.

Having won the Masters last April for his 15th major and the Zozo Championship in October, Woods' hopes of PGA Tour win No.83 are well and truly alive.

"It would be great," Woods said of the record. "But I also won a Junior World [Championship] here, too."

Meanwhile, secondary tour graduate Rhein Gibson is next best of the Australians at three under, with recent Sony Open winner Cameron Smith a shot further back.

Aaron Baddeley (one under), two-time event winner Jason Day (one over), Matt Jones (three over), Cameron Davis and John Senden (both four over) round out the Australian contingent.