Tiger Woods does not know when he will return to the PGA Tour following the car accident that left him in a wheelchair for two months, but said he would love to compete in the British Open in July.

Woods, who was close to having his leg amputated after he lost control of his car in Los Angeles, won two of his 15 career major titles at the Old Course at St Andrews in Scotland and has not ruled out being in the field.

“I would love to play at St Andrews, there’s no doubt about it. It’s my favourite golf course in the world,” Woods said at Albany Golf Club in the Bahamas, where he is the host of this week’s Hero World Challenge.

“Physically, hopefully I can. I’ve got to get there first. Tournament’s not going to go anywhere, but I need to get there.”

Woods walked into the news conference, his first since the car accident, without crutches. During the 40-minute session, he admitted that both his leg and back hurt just sitting there. He gave little information on the crash in February that derailed his career.

“All those answers have been answered in the investigation,” he said. “So, you can read about all of that there, in the police report.” 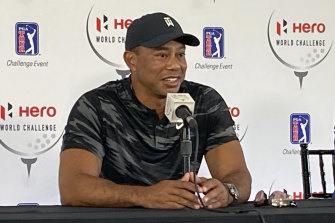 Tiger Woods at his first press conference since his car crash in February.Credit:AP

When asked if he had any flashbacks to the trauma, he replied: “I don’t, no. Very lucky in that way.”

Woods, who recently posted a video on social media showing him hitting a golf shot, acknowledged he has a long road ahead in his recovery, including breaking up scar tissue and things he said “really hurt”.

When asked how he felt about the expectation among supporters who believe he can still win a major, the 45-year-old said he was flattered people thought that highly of his game.

“For that to happen I have a long way to go,” Woods said. “But I enjoy the challenge of getting in there and trying to push it to the next level. Sometimes it’s two steps forward and one step back but you got to go through it.

“Maybe one day it will be good enough where I can get out here and compete against these best players in the world again.”

Woods collected his most recent major at the 2019 Masters, a remarkable win that followed several surgeries to his back and knee and personal problems that convinced many the best golfer of his generation was done.

Now Woods, who accepted that the “clock’s ticking” on his storied career, said he had “no desire” to resume a full playing schedule but that he would prefer to ramp up his preparations for a few events.

“There’s no reason that I can’t do that and feel ready,” said Woods, who has not played competitive golf since the 2020 Masters last November.

“I may not be tournament sharp in the sense I haven’t played tournaments, but I think if you practise correctly and you do it correctly, that I’ve come off surgeries before, I’ve come off long layoffs and I’ve won or come close to winning before.

“So I know the recipe for it, I’ve just got to get to a point where I feel comfortable enough where I can do that again.”