Xander Schauffele won the Travelers Championship with a three-stroke swing on the final hole on Sunday, hitting to 3 feet for birdie after rookie Sahith Theegala took two shots to get out of a bunker and made a double bogey in the group ahead.

A stroke ahead entering the day, Schauffele finished with a 2-under 68 at TPC River Highlands to beat Theegala and J.T. Poston by two strokes. The Olympic champion had a 19-under 261 total.

‘My mind was telling me to hit a good drive and then use your sand wedge or lob wedge in there and make birdie,’ Schauffele said. ‘To sit there and watch what happened was a bit of a shock, obviously. I really had to try and focus on the task at hand.’ 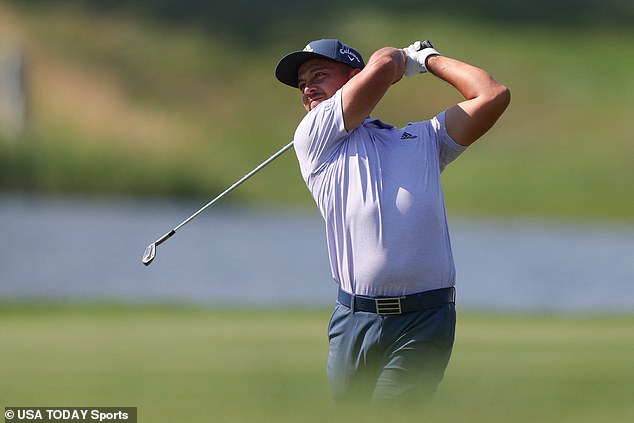 Schauffele won for the sixth time on the PGA Tour and the second this season after teaming with Patrick Cantlay to win the Zurich Classic of New Orleans in April.

Theegala was lurking near the top of the leaderboard all day and grabbed a share of the lead on 15, driving the green on the par-4 hole and making a 4-foot birdie putt. He overtook Schauffele with an 11-footer for birdie on 17, pumping his fist.

But the former Pepperdine star hit his tee shot on 18 left and into the front lip of a fairway bunker. He needed two tries to get out the bunker. 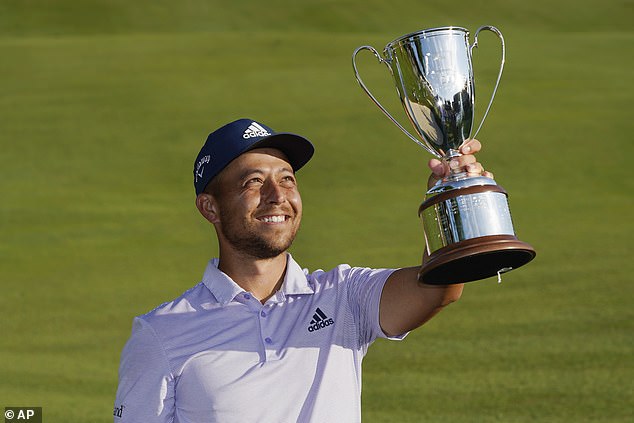 ‘Somehow my body just, I just straight bladed it,’ he said. ‘I had room there. I don’t know how it looked, but I had room there. Just didn’t think I would let myself blade it. But I guess the moment was – and then from there it’s, like, got to try and make 5 now.’

His 12-foot bogey putt lipped out, and he fell to his knees in agony.

‘I did everything I thought I had to do and it just happened to be everything bad culminated on one hole,’ he said. ‘I did so much good.’

Theegala was trying to become just the second rookie to win this season, joining Chad Ramey, who won in the Dominican Republic. The 2020 Travelers was his first professional start, but he missed the cut. 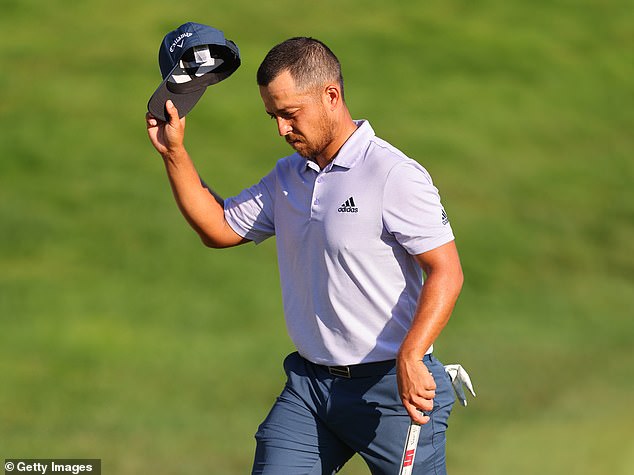 Schauffele, meanwhile was consistent, with two birdies and a bogey on the front before mirroring that score on the back.

He had a chance to tie Theegala on the 17th, but missed a 27-footer.

Amateur Michael Thorbjornsen, from nearby Wellesley, Massachusetts, was fourth at 15 under after a 66.

The Stanford star was looking to become the first amateur to win on the tour since Phil Mickelson it in 1991. He shot a 31 on the front nine, including an eagle on No. 6 after putting a 261-yard approach a foot from the hole. He finished with a 66.

‘I felt really good and comfortable out there, then near the end had a couple of hiccups, which happens sometimes,’ said Thorbjornsen, who added that he plans to return to college in the fall. ‘I don’t think I was too nervous, just a couple of miss-executions.’

The previous best finish by an amateur at the Connecticut tournament came in 1966, when Tim Grant finished tied for sixth place at the nearby Wethersfield Country Club in what was then known as the Insurance City Open.

Poston, who was the co-leader after shooting a first-round 62, started the day tied for seventh place, nine strokes back. He put up a bogey-free 64, finishing with his sixth birdie of the day.

‘I putted well, drove it well, hit my irons good,’ he said 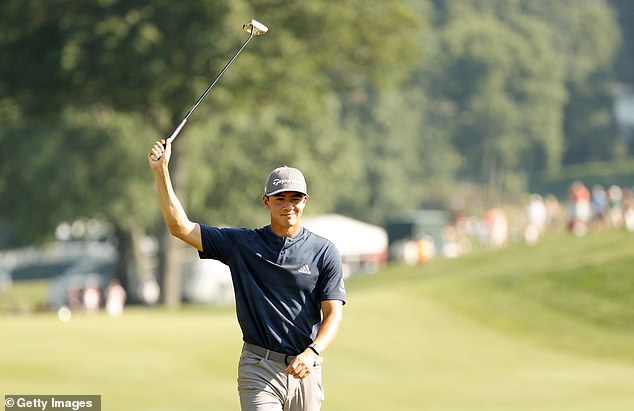 Patrick Cantlay began the day just a stroke behind his friend Schauffele. But last year’s FedEx Cup champion, who had a combined four bogeys in the first three rounds, shot five of them on the front nine on Sunday.

Luke List, who shot a 65 on Sunday to finish at 9-under had the shot of the day, opening his round with 119-yard approach on No. 1 that took a short bounce into the hole for an eagle.

Rory McIlroy, who shot an opening-round 62, also finished at 9 under with a 67 on Sunday. This was his fourth straight tournament for the No. 2-ranked player in the world, who said he won’t play again before the Open Championship at St. Andrews next month. 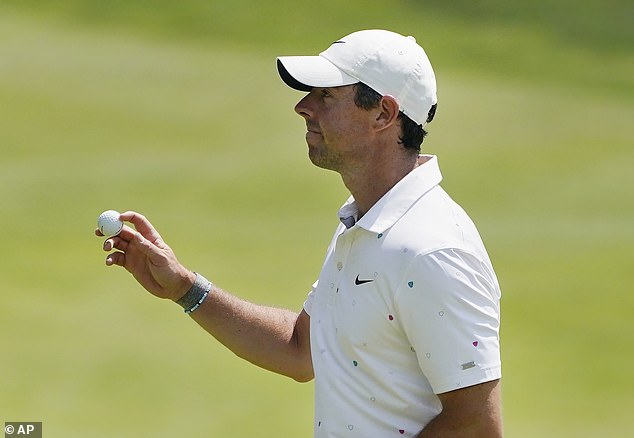 Morgan Hoffmann, who is fighting facioscapulohumeral muscular dystrophy, finished at 2 over in his third and final tournament of the year on a three-event medical exemption. The 32-year-old, who took several years off from the Tour to focus on his health, shot a 71 Sunday, ending his morning with a birdie after hitting his approach at 18 less than 2-feet from the pin.

Hoffman, a New Jersey native now living in Costa Rica, said he’s hoping to get a few sponsor’s exemptions this summer and is cherishing the golf while trying to inspire others by staying healthy.

‘I’m just going to keep doing what I’m doing, cleansing monthly, eating nourishing food and working out hard and keep gaining muscle and in the meantime I’m building a wellness center (in Costa Rica) to help other people do the same,’ he said.