Glyn Schofield will be gunning to make it back-to-back Saturday wins for Godolphin when he partners promising mare Multaja in the group 3 Nivison at Randwick.

Schofield, who has only ridden the four-year-old once in her career, will be thrown the blue colours again after piloting Cascadian to victory on The Everest day. 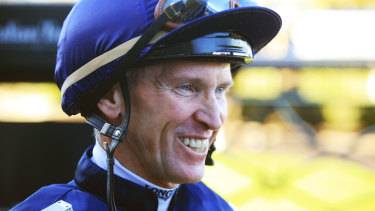 Glyn Schofield will don the Godolphin blue again on Saturday at Randwick after scoring with Cascadian on Everest day.Credit:Getty

Multaja was a $5.50 third pick with BetEasy on Thursday for the Nivison, which can be used as a springboard for Melbourne Cup week.

James Cummings flirted with Multaja at the elite level when she started hard in the market in the Tatt's Tiara during Queensland's winter carnival, but finished in the second half of the field, three lengths from winner Invincibella.

"To win a race on Everest day is great and I hadn't ridden a winner for Godolphin for a while, but in saying that I haven't had that many opportunities either," Schofield said. "It was really good of them to put me on a horse that has got a lot of upside.

"Multaja was a bit fierce at that stage of her career [when I rode her]. I think she's learned to race a bit better. I don't think she had much luck that day [in the Tatt's Tiara]. She certainly did run well. She does have a good turn of speed, that I do know."

Cummings will focus most of his attention on Avilius in the Cox Plate, but will keep an eye on Randwick in the only group race on the program. Reelem In Ruby is poised to start favourite as a $3.30 chance with BetEasy.

"Her first-up effort was OK off a wide run," Cummings said. "She can improve going out to six furlongs at a course where she is one-from-one."

Cummings will also saddle up Shaibanat in the inaugural $1 million Bondi Stakes as well as Roosevelt in a benchmark 78 handicap.