The star Hawkes Racing colt, who is half-owned by the Newgate Farm stud in the Hunter Valley, recently resumed work ahead of a spring campaign that promises the world. 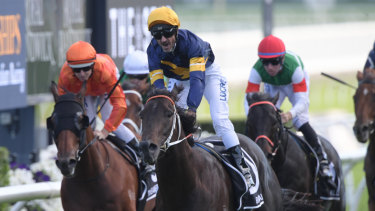 Mile high: Glen Boss sits up as Brutal goes past the post in the Doncaster.Credit:AAP

The three-year-old is bucking the trend of retiring to stud after a brilliant group 1 win to chase more elite wins this spring, and The Everest has been flagged as a race of interest.

There are five slots remaining in the race, but Michael Hawkes said he had not had a call from any of the owners.

"I’ve had nothing. For us it’s about getting him right and running him in the right races where he is going to be competitive and at his best," Hawkes said.

"He’s an entire, so we will try and keep him intact.

"We paid a lot of money for him, so we will do the best thing by the horse."

Between now and then, the stable expect the horse to show whether he is capable of the sprint required to beat Australia's best short-course horses over 1200m, or whether he is a true miler, as his win in the Doncaster would indicate.

"He looks outstanding. He’s been back in for a couple of weeks now," Hawkes said.

"He will step up next week. Nothing has been planned for him yet. We will just bob along and see where he’s at.

"If the horse tells us he is ready for any race, then that’s it."

Glyn Schofield will miss the next seven meetings after stewards pinged him for failing to ride out Our Winnie in the TAB BM78 Handicap.

Stewards were not pleased with Schofield, whose relaxed demeanour in the finish meant Our Winnie missed third place and cost connections $5000 in prizemoney.

Schofield pleaded guilty to the charge.

Dolan pleaded guilty to the careless riding charge after he shifted Nashian in on the eventual winner – My Blue Jeans ($11) – at the 1000m mark.

While the majority of punters were left scratching their heads after Spiritual Pursuit ($1.55 fav) failed to deliver on market expectation, Kris Lees couldn't help but smile as Agent Pippa cruised to a comfortable win off a 224-day spell.

Having already claimed group 3 success over 1100m in Western Australia, Lees was not surprised to see the filly fly to the front and leave the rest of the field gasping for air a long way from home.

"Hopefully she can get to that level over here over the next 12 months," Lees said post race.

"She was quite impressive. It is winter racing, but she got a good ride from Hughie – a good, positive ride – and she did the rest.

"I thought coming into the race, being 1100m first up, she could be a touch vulnerable late but he rode her well and had the others off the bridle. It was a good win."

Spiritual Pursuit's jockey, Samantha Clenton, said her filly had nothing to offer when called upon at the 600m mark.

"She just raced like she'd had enough. I had nothing at the 600," Clenton said.

Phaistos weaved his way to a dominant win under Hugh Bowman in the second race of the day and the way the gelding finished the race off indicates he will only be better over more ground, according to Godolphin trainer James Cummings.

"It was a top July effort from a three-year-old who I still think is on the way up," Cummings said.

"I think we haven't seen the best of him yet.

"Hugh Bowman told me that the ground today was all about having his horses balanced. I think he would have been happy to buy a little more balance than he got, but he pushed into the clear and the horse savaged the line.

"He's a dead-set miler, I think. He's certainly one to follow."

Race-by-race tips and preview for Wellington on Monday