A four-year-old who lines up for the ninth time despite having only debuted six months ago is ready to break through at Monday’s feature Grafton meeting.

Honest gelding Lampkin Lane debuted for the Henry Dwyer stable at Sandown in mid-March, finishing well down the track. 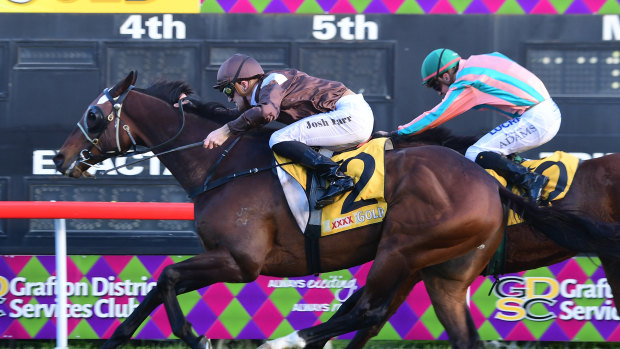 Racing returns to Grafton for an eight-race card on Monday.

He had three more mixed efforts at various tracks on rain-affected ground around Victoria before crossing the border mid-year and joining the Shane Everson stable on the NSW North Coast.

After some quick settling in, Lampkin Lane reloaded exactly two months later, disappointing in a Grafton maiden when unwanted in betting.

But as he finally found some drier tracks, the son of 2013 Cox Plate winner Savabeel has started to put his mind on the job.

He held his ground okay in a handy maiden at Lismore in late July before returning home to step up in distance and hit the line to only miss by a head at the August 15 meeting.

Then just three weeks ago, Lampkin Lane again charged home from near the rear in a better quality maiden over a similar trip.

Now the stars are set to line up in what looks a thinner Maiden Plate over 1700m on a likely Good-rated surface where he can settle back with cover under regular rider Luke Rolls before unleashing that customary finish.

And that race could well be the entree for the Everson yard ahead of the main course.

Promising five-year-old stablemate Hidden Trust resumes with a stack of gear changes in a Class 1 Hcp over 1000m.

The lightly raced son of Hidden Dragon hasn’t raced for seven months since an ultra-consistent prep when he never missed a place up to stronger Class 2 company.

A noted fresh performer who relishes dry ground, Hidden Trust hasn’t publicly trialled, but reportedly has been working strong, and looks well placed to hit the ground running at home before being set for bigger targets.

Supplied by Racing NSW
Full form and race replays available at racingnsw.com.au.
News, results and expert analysis from the weekend of sport sent every Monday. Sign up for our Sport newsletter