James Cummings has been around racing and the Golden Slipper since his school days. While the four Slipper successes for his legendary grandfather Bart came before he was born, he knows the pressure of two-year-olds on the biggest day.

Cummings remembers saddling Salade and Empress Rock in the 2011 edition for his grandfather; his father Anthony having favourites such as Casino Prince and Smart Missile. He even had Good Standing as a runner in 2016 before he moved to Godolphin. 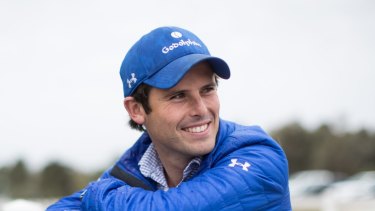 But it is fair to say he hasn’t had a day like he will have on Saturday when Microphone, Tenley, Pin Sec, Kiamichi and Exhilarates line up in an even Golden Slipper, with the possibility of Bivouac joining them if there is a scratching.

“That is how it will be judged. So the focus has been to have them all at their best.”

The Cummings name has been on the Golden Slipper’s honour roll since Century Miss in 1979, but they have been players consistently.

“Working in a big stable you are exposed to this race because we had runners. It is not like I haven't been here before,” he said. “If I don’t win it, I will want it more next year, that’s what generally happens.”

Cummings carries a name which has a weight unmatched in Australian racing, and he now fronts a stable that gets worldwide attention, the distinctive Godolphin blue, which will split by a half-dozen different cap colours on Saturday.

Even with the biggest racing job in the country, Cummings is still a student of racing, though in a sense already has a couple of degrees and is working on a Phd. He’s not scared to wait with a horse to get the best possible result.

“It is not about this one race, we didn’t pay up with one filly [Athiri] and another horse we hoped that would be here is spelling [Tassort],” Cummings said. “You learn patience, it has to be about tomorrow with two-year-olds. Making the right decisions mean you have a horse like Encryption running in The Galaxy on Saturday.”

The list of achievements for Cummings this season includes a Talindert Stakes and Skyline Stakes with Microphone, Magic Millions from Exhilarates, and a Magic Night Stakes with Kiamichi.

Then there are the unbeaten fillies: Tenley, which the bookies rates his best chance at $6, she has the Pierro Plate and Reisling Stakes on her resume; while latecomer Pin Sec stormed away with the Black Opal.

That would be a career for some trainers, let alone one season.

So it is not surprising Cummings can make a case for all his runners as none of them have fluked their way to the top.

“The exciting thing about Tenley is not only that she is undefeated in three starts, which is very good considering her style of getting back and finishing off, but that she improves with every run,” Cummings said “There’s plenty of depth about her that will allow her to enjoy a fast-run Golden Slipper and come with the final run.

“She beat Exhilarates in the Reisling, who I expect to improve from that run. I feel she has herself physically in a very good place and we know she has the mental fortitude to cope with the occasion from the Gold Coast.”

He moves through the runners with the ease of a man who knows they will perform.

“You look at Microphone and he has the strength about him that allows him to absorb what he’s been asked to do and still be at his best for the Golden Slipper. I think he is going to be suited by having the three-week break,” Cummimgs continued.

“Pin Sec obliterated her opponents in the Black Opal a fortnight ago and arrives here fitter second up.

“The wet track will be to her liking as a Lonhro filly from a daughter of Commands, which has been shown to be a successful formula for rain-affected going.”

Then there is the horse that started the blue juvenile avalanche, which stands at 20 victories for the season at a strike rate of 22 per cent with nine stakes wins.

“Kiamichi was our first two-year-old winner of the season and brings a wonderful Rosehill record into the Golden Slipper after her determined Magic Night win last week," he said.

“She is very well and we know she handles the soft track.”