Downdraft showed his adaptability to storm away with the Lexus Hotham Stakes, guaranteeing a start in Tuesday's Melbourne Cup where he will carry 5.5 kilograms less than the 59 kilograms he lugged around a wet Flemington.

The decision to run the five-year-old on Saturday was made by the trainer Joseph O'Brien – who won the 2017 Cup with Rekindling – in consultation with OTI Racing's Terry Henderson after the scratchings of Marmelo, Ispolini and Angel of Truth made a start in the Cup likely regardless of whether he ran.

John Allen will ride the horse in the great race with Henderson admitting it would be unusual for Downdraft to back up to run again on Tuesday.

However he said O'Brien, who will arrive in Melbourne on Monday morning, was confident it would not be an issue for Downdraft and told Henderson not to worry about it.

"He is not a particularly strong looking horse but inside he has got plenty of determination so he was very happy to run him and was confident that if he ran well today he could back up," Henderson said.

Downdraft ran third in the Moonee Valley Cup behind Ballymore's Hunting Horn but is nearing peak fitness at Werribee.

Allen said he began his career with O'Brien's grandfather Joe Crowley and said it felt as though his career had gone full circle as he jumps on the back of the young trainer's Melbourne Cup hope. 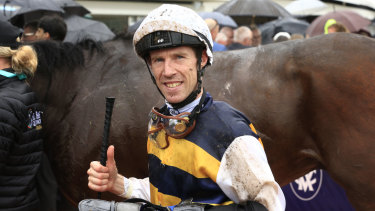 "Hopefully he backs up good and he’ll be in there with a great chance," Allen said.

"He seems to have a great attitude, obviously I don’t know a whole lot about him. I believe Joseph (O’Brien) was pretty confident he could handle it. The race last Saturday was only really a piece of work to him. It got him spot on for today and he never looked like getting beaten today."

Haky's trainer John Hammond was disappointed the horse could not win his way into the race with a win with the wide barrier cruelling his chances.

"The other horses took him on a bit down the far side and he didn't get to settle," Hammond said.

Haky may proceed to the Sandown Classic depending on how he pulls up.

Other Melbourne Cup contenders Sound, Neufbosc and Youngstar were scratched from the Lexus Stakes as they were already certain of a start in the Melbourne Cup.

Star quality on show at The Valley