Hong Kong is Classique Legend's new home after his blistering win in October's $15 million Randwick sprint, but rumours circulating about how he's settled into his new environment since leaving Australia have punters questioning whether to jump into $1.75 odds. 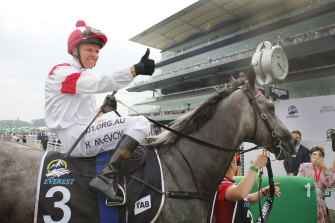 Aussie hoop Kerrin McEvoy was expected to ride the grey flash on Sunday, but he pulled out from the trip because of the uncertainty he faced trying to get back into the country during the COVID-19 pandemic.

Vincent Ho will now take the ride. Hot King Prawn, who finished second in this race last year, is considered the main danger at $4.50.

A winner of 13 races from 14 starts, the Hong Kong star looks destined to continue his incredible form, rated a $1.80 chance on Sunday. Japanese star Admire Mars and former Aussie horse Beauty Generation – trained by David Hayes – are among the contenders.

The Hong Kong Cup will also be a feature on Sunday, with Japanese stars Danon Premium and Win Bright clashing with Aidan O'Brien's globetrotter Magical.

Saturday's $250,000 feature race at Eagle Farm, named The Gateway, will provide the winner with a ticket into next year's Stradbroke Handicap.

The first of five feature summer cards in Queensland this summer, the winner of Saturday's 1400-metre race can set their sights on group 1 glory in the winter.

Next week, Eagle Farm will host the new Grand Prix Stakes, a $250,000 race for three-year-old stayers, before all attention turns towards the Magic Millions carnival.

It's not a quaddie leg on Saturday, but the 1000-metre sprint at Flemington will prove one of the highlights on the card.

Prezado, a lover of the Flemington straight, will race second up on Saturday against West Australian mare Fabergino, who last ran in the group 1 VRC Sprint behind Bivouac.

It's been a tricky sprint for Fabergino, who copped a wet track in the Moir Stakes and ran second to Graff in the Caulfield Sprint before finding the 1200-metre group 1 too difficult a task.

Fabergino won over this track and distance in February and has been established a narrow favourite over Prezado. The race also includes Grandview Avenue, Shamino, William Thomas and Human Nature.

Journalist allowed in at Newcastle Racecourse tells of his experience

Race-by-race tips and preview for Canterbury on Friday night