Jamie Kah is currently sitting on top of the Victorian Metropolitan Jockeys' Premiership table with 25 wins, But such is the competitive nature of racing during the main week of Melbourne's spring carnival that not even the biggest names can be sure of finishing in the frame.

Kah had an afternoon to remember at The Valley on Cox Plate day when she rode four winners, but she only hit the target once over the four-day Melbourne Cup carnival at Flemington when she partnered South Australian filly Victoria Quay in the Wakeful Stakes. 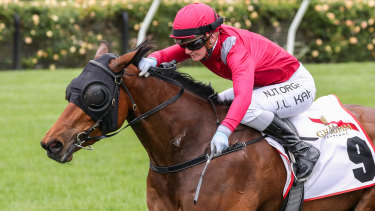 The former South Australian champion gets an ideal opportunity to get back into the winner's circle early on Saturday's Sandown card when she climbs aboard favourite Brazen Boy for Phillip Stokes in the opening two-year-old race, the Merson Cooper Stakes, and then takes the ride on La Mexicana in the listed Twilight Glow Stakes for the Freedman father-and-son training partnership of Anthony and Sam.

La Mexicana was one of that quartet of winners at The Valley on Cox Plate day and is going for a hat-trick.

Few apprentices get the chance to shine, never mind get race rides, during the main spring carnival period. Michael Poy, last season's champion claimer, has proved an exception this year.

The son of former champion jockey Michael Clarke (who won a Melbourne Cup on At Talaq and a Cox Plate and Japan Cup on Better Loosen Up), Poy has ridden winners on Cox Plate day, Oaks day and Stakes day at Flemington – two of them coming on Ancestry for Phillip Stokes, the other for Dan O'Sullivan on Affair To Remember.

He gets the chance to sign off a memorable carnival with seven rides at Sandown including three for Stokes, who has been a big supporter of the up-and-coming rider.

SOUNDING OUT THE OPPOSITION

Sound must count as one of the unluckiest horses of the spring given his propensity for finding one rival just too good in key lead-up races.

Mike Moroney's ex-German stayer was being aimed at the big cups races but just kept coming up short, finishing second in both The Bart Cummings (to Persan) and the Lexus Hotham (to Ashrun).

Both races would have guaranteed the eight-year-old a Melbourne Cup start, but he went down by a length on the former occasion and a short head on the latter.

He gets his chance for some consolation when he lines up in the Zipping Classic, a group 2 contest worth $250,000, in which he will be up against a handy field of up and comers and established stayers looking to finish the carnival with a decent pay day.

Smith has blinkered view towards group 1 racing with Fierce Impact