Jockey Jack Martin knows he’s lucky not to be in a hospital ward let alone back riding at Mornington on Wednesday.

Martin hasn’t ridden since a barrier accident in which his head crashed into the barriers on Cranbourne Cup Day last month.

His mount, Our Luca, leapt into the air at the start of a race. Martin’s head was catapulted into a bar running across the top of the starting stalls, causing the jockey to “see white dots for a minute”.

Fellow rider Dwayne Dunn will be out for the foreseeable future after suffering neck fractures in a similar incident at The Valley in September.

Martin initially thought he had escaped unscathed from the incident but a look at his helmet told him otherwise.

“Initially, I got up and went to the ambulance and thought I was fine but I took the cap off my helmet and there was a massive dent and crack in the front of it,” Martin said.

“But you watch the impact and the ambulance people said, ‘Dwayne Dunn thought he was all right and he ended up with two fractures in his neck’.

“What you look at the footage and the impact on the helmet, I was very lucky.”

Luckily, Martin avoided the fractures but came away with concussion, meaning he has only spent five weeks off the scene. 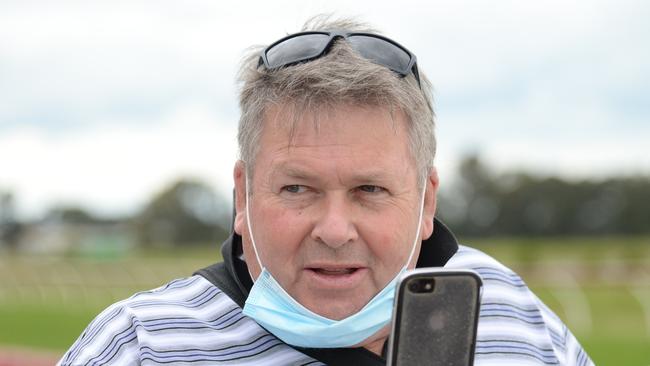 The jockey said he took a couple of weeks to recover from the Cranbourne incident but decided to extend his break through the latter stages of the spring carnival.

“The adrenaline wore off and my head was a bit sore and my neck was sore from the crush of the impact and the whiplash,” Martin said.

“I’ve had heaps of concussions over the years and I my neck got worse day after day and it took two or three weeks before my head was OK.

“I thought I might as well get my body right and enjoy a bit of time off and I’ve got back into in the last week-and-a-half riding work.”

Martin has two rides, both for his former master Pat Carey, at Mornington on Wednesday.

Carey has booked Martin to ride the first-starter Starlight Scope, who impressed when circling his rivals to win a Mornington jumpout earlier this month.

TAB has Starlight Scope as a $3.90 chance to give Martin a winner on his first day back in the saddle.

Originally published asJack lucky to be back at Mornington

‘She is obviously the rising star after Winx’: Waller praises Funstar