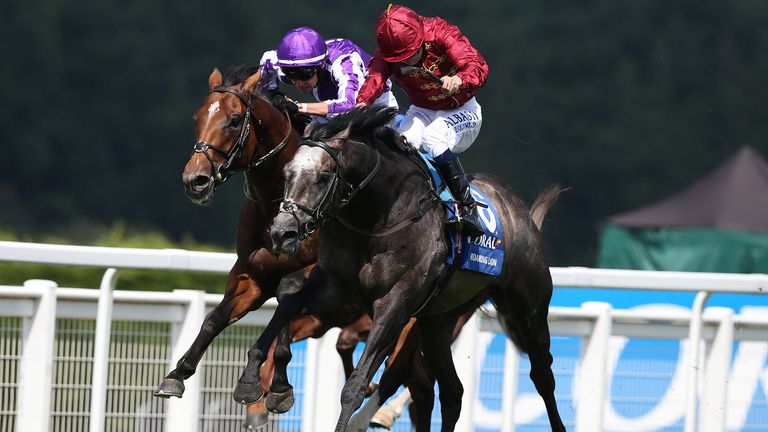 The Qatar Racing-owned colt has enjoyed a magnificent campaign, claiming four Group One contests in the shape of the Coral-Eclipse, Juddmonte International, Irish Champion Stakes and the Queen Elizabeth II Stakes.

That last-named contest came at a mile and saw him break new ground – but he must do so again when he steps back up to a mile and a quarter at the weekend, crucially racing on dirt for the first time.

A son of Kitten’s Joy, Roaring Lion was put through the starting stalls by Frankie Dettori on Wednesday morning, in the absence of big-race pilot Oisin Murphy.

The three-year-old spent around four minutes behind the stalls and the same amount of time in them, and the longer it went the more settled he became.

Gosden said: “Frankie knows a thing or two about American racing, so it seemed the logical thing to do.

“I’m happy with the way it went, as I wanted the horse to have experience of the gate before Saturday.”

He added: “It is a huge challenge for him, having only won the QEII 11 days ago. Frankie looked at him this morning and asked me, ‘Is that horse fit?’, such is the middle on him.

“He was playing and squealing this morning, which is perfectly normal for him.

“I would have been disappointed if he hadn’t done that.”

From Donald to the Derby: Meech in charge in Ladbrokes Classic win

Altior can strike blow for experience over youth at Cheltenham Festival