However, he admits that he will be nearly as pleased if his Flemington neighbour can turn the tables from Saturday in Thursday's group 1 race.

The two horses are key chances in the feature race that will start just before 6pm after the VRC decided to push back the nine race card and run the first at 1:50pm. 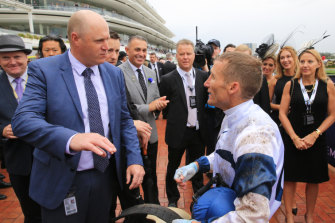 O'Brien and Kavanagh's bond was strengthened when they both were forced to fight charges relating to the use of cobalt that threatened their careers. They were ultimately vindicated when VCAT found they had no knowledge that a prohibited substance had been administered to their horses.

On Thursday they meet with the two Oaks favourites, having both now won the Melbourne Cup a decade apart with Vow And Declare and Shocking in 2009.

"Whichever way it goes tomorrow, I hope it is one of us," O'Brien said.

Although the two fought out the finish of the Wakeful Stakes – normally a good guide to the Oaks – they will face stiff opposition from a number of horses including the Mitch Freedman-trained Moonlight Maid and the Archie Alexander-trained Gamay.

By sheer coincidence those two Ballarat-based trainers have also faced investigations relating to the alleged presence of cobalt in their horses within the past 12 months.

O'Brien spoke in their defence on Tuesday, moments after winning Australia's iconic race.

"I still think the issue today is a really troublesome one," O'Brien said.

"We have got Mitch Freedman, Archie Alexander, Steven Pateman – they are the next generation of trainers in Victoria and they have all got cobalt charges.

"It’s something that needs to be tackled."

The Age reported in September that Racing Australia has tasked its veterinary advisory committee with providing fresh analysis on the performance-enhancing qualities of cobalt, with a report due to be presented at Racing Australia's November 12 board meeting.

However O'Brien can head to the Oaks without the spectre hanging over his head, a live chance to win the race with Miami Bound.

"We're hopeful. We're going in there with a filly that has had a really good preparation for it," he said.

"She [has been] preparing for this all spring and her run on Saturday was terrific in the Wakeful."

O'Brien said the three-year-old had recovered superbly from the run on Victoria Derby day and he was confident she would get the 2500 metres.

"She is a very tough filly too and she has pulled up really, really well, so she is going to go to the races tomorrow [Thursday] with no excuses," he said.

Jumps titans to face off at Ballarat