Covid-19 has heaped huge problems on racing but it might ensure we have one of the most thrilling battles ever for the jump jockeys’ title.

The way the season has been shaped, Harry Cobden, backed by 11-time champion trainer Paul Nicholls, could be in prime position to win the championship for the first time. A treble at Ffos Las on Sunday — including victory on Hitman, a gelding part-owned by Sir Alex Ferguson, in the Beginners’ Chase — took Cobden to within four of reigning champion Brian Hughes.

Usually by this time, the pecking order is well established. But with less summer jumping there is more to play for. 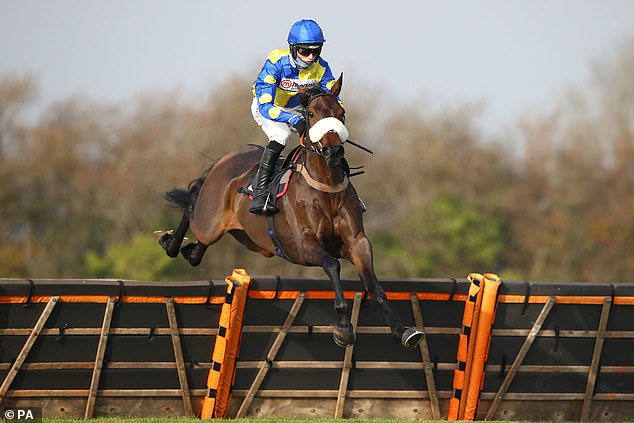 Hughes is in pole position. Competing on the northern circuit, he continues to be underestimated. Harry Skelton, backed by trainer brother Dan, is a player but it will be tough for Richard Johnson to get back into contention.

Aidan Coleman being appointed stable jockey to trainer Olly Murphy has cut off a reliable supply of winners and a few more may evaporate with Jonjo O’Neill Jnr now coming in for wider support from owner JP McManus.

Not many trainers will have more winners than Nicholls. Cobden should ride most of them. He’ll also pick up wins from trainer Colin Tizzard.

If the 22-year-old is in title contention as the race enters its final weeks, expect Nicholls to throw his weight behind getting his rider over the line.

Back Rob and Burrow Seven

No one can fail to be touched by the battle Leeds Rhinos rugby league player Rob Burrow is waging against Motor Neurone Disease and his efforts to raise money for research aimed at finding a cure. I am delighted that racing has got involved with Rob’s efforts.

Burrow Seven — a nod to Rob’s No 7 scrum-half jersey — has just gone into training with Jedd O’Keeffe at his north Yorkshire stable in Middleham, with the hope that he will be running in the new year. Racing fans can join the Burrow Seven Racing Club for £59 with all profits going to the MND Association.

Rob, 38, who retired in 2017, was joined by his parents Irene and Geoff, plus friend and former Leeds Rhino Barrie McDermott, when they went down to see their new horse last week.

My partner Lucinda Russell and I have been privileged to train horses for a group supporting Doddie Weir. Like Rob, the spirit Doddie has demonstrated in battling MND and tirelessly raising funds shows why he is a legend of Scottish rugby union. We have Brodick in training for the owner group London Scots for Doddie. He finished fifth on his hurdling debut at Musselburgh last week and should be able to build on that.

When you get a bit despondent about a favourite getting beaten, thinking of Rob and Doddie puts the situation into perspective.

More details about getting involved in Rob’s horse can be found at www.burrowseven.com

I’ve been involved with some fantastic horses as both a jockey and trainer but I can honestly say none has given me as much pleasure as One For Arthur.

Winning the Grand National in 2017 with him for Scotland was a great occasion and the pleasure it brought to all involved was uplifting.

Announcing his retirement on Friday evoked mixed feelings but it was the right thing to do. He had lost his spark and showed no enthusiasm during his last jumping session.

With the Flat turf season ending at Doncaster on Saturday, focus is truly on the jumps campaign with Cheltenham’s three-day November fixture starting on Friday. Here are a few horses I am looking forward to seeing.

THE BIG BREAKAWAY: Colin Tizzard’s former Irish point-to-point winner, fourth to unbeaten Envoi Allen in the Ballymore Novices’ Hurdle, shapes as though fences and a step up to three miles will bring out the best in him.

BOOTHILL: Runner-up in a pair of Irish points, he impressed when winning in a bumper at Kempton in February for trainer Harry Fry. He should be a useful novice hurdler.

BEAR GHYLLS: Romped home in a Warwick bumper last season and was impressive on his Lingfield hurdling debut last month. There could be a decent prize in the gelding trained by Nicky Martin.

WETLANDS: Has to shoulder a fair reputation after winning a Newcastle bumper for trainer Nicky Richards. I wouldn’t be put off by his seasonal debut defeat over hurdles at Ayr last month.

Royal Ascot results LIVE: All the winners and places on day two at Ascot