Selections based on a good track.

11. Ring Ahoy was a drifter in the market first-up so expecting there’s improvement to come on
what was a handy first-up fourth here two weeks ago. If he can take some advantage of an inside
gate and be that little bit closer he looks a good chance to be right in the finish.

Dangers: 5. Stylised is a nicely bred Godolphin colt who looked the part in his latest trial scoring
softly over 1200m a couple of weeks back. Tricky alley but it’s a fair starting point and the trip will
suit first-up. Keep safe. 10. Surf On Turf had a tough run first-up at Kensington a few weeks ago
when solid in the market and he boxed on pretty well to finish midfield. Expect he’ll be forward from
the softer gate and he could be a big improver. 2. Rediener sat handy and made a bid for victory in
the straight but had his challenge repelled. Fitter for it and stays at the same trip, from the inside
gate he can be thereabouts again.

3. Pereille is one of a number of impressive triallers on debut here and he certainly wasn’t asked for
anything in his recent effort at Hawkesbury, cruising into a close second. Draws nicely and sure to be
very competitive.

Dangers: 11. On The Beach looks a typical jump and run type from the Waterhouse/Bott stable
based on her two easy trial wins at Rosehill and Gosford. Will roll forward from the wide gate and
must be respected. 8. Enuendo was quite sharp leading all the way to win her latest trial at Warwick
Farm recently. James McDonald rode her in both but rides Pereille here. Draw gives her the chance
to be prominent and can’t be overlooked. 4. Shadow Vampire wasn’t disgraced on debut in what
was a solid maiden back in May, he made a sharp run before condition gave out. Fitter for two
recent trials and is one to keep an eye on.

3. Legend Has It is more than capable of taking this out, he won a similar race back in February and
didn’t help himself by being slowly away third-up last time at Wyong. Hit the line well there and is a
good chance if he can get the right run.

Dangers: 2. Just A Jedi is a consistent type whose three runs back have been solid and he steps up in
trip now fourth-up. Meets Legend Has it slightly worse for finishing second in that race in February,
but has an on pace pattern that will help his cause. 5. Father’s Day is an improving type who showed
staying promise with a solid win at Hawkesbury recently to make it two on end. Nice 5kg drop in
weight after the claim and is right in this.

1. Heljami makes the switch from Victoria and is one to be
wary of from the Maher/Eustace yard. Won at Ballarat three starts back on the synthetic and finds
James McDonald. Watch betting.

11. Vivid Flash has trialled up very nicely for a big first-up run and the form around her shapes up
pretty well from last time in. Ran Shades Of Rose to less than half a length in February, only win was
on good ground and should get last shot at them.

Dangers: 12. Cinderella Days made it two from two with an all the way win first-up over 1200m on
her home track and does look a filly of promise. It’ll be interesting to see if she leads here in a race
that looks to have some pressure or adapts. 9. Amati won narrowly on debut then was run down by
Owen County at Randwick, both starts on heavy tracks. She trialled okay at Rosehill recently behind
Hameron and is sure to be strong late. 6. Stalking started last prep in a maiden and ended it in a
Group 2 finishing midfield in the Doomben Roses. She has run well fresh in both preps and wouldn’t
be surprised if she does the same here.

4. Willinga Rufio impressed in his first preparation winning twice then a solid third at Rosehill back in
June. He’s trialled strongly and kicking off at this trip suits given his debut win was at 1500m. Will be
on speed from the inside gate and is hard to beat. 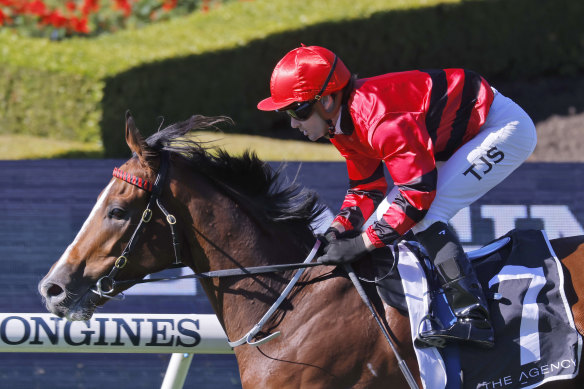 Dangers: 5. Kokoro probably goes back from the wide gate and if there is pressure up front he’ll
come right into play. Dominant showing at Wyong last time after settling near the tail and looms as a
threat. 11. Onemore Sapphire can be a bit hit and miss but there was plenty of merit in his first-up
effort in a Midway a month ago. Four of his five wins are at this trip and he’s an each-way chance. 9.
Fanmalia is another who would be suited by a solid tempo, he’s been racing well in high country
benchmark races around this trip and is another to throw into the mix at odds.

2. Conrad is not a noted leader so he was game in defeat when run down late by Capo Strada two
weeks ago. No harder and unlikely to be forced into leading this time, as he showed winning second-
up he can be effective from off the pace. Go well.

Dangers: 4. Pretty Amazing stamped herself as a promising middle distance type in the autumn
winning the Group 3 Kembla Classic before a disappointing effort in the Group 1 Vinery. Given some
soft trials and she’s sure to be hitting the line fresh.

10. Stick To Your Guns scored a soft win at his first run for Annabel Neasham at Kembla, bursting through when a gap opened. No issues with the extra 200m and again comes up with gate one. Definite chance. 17. Lindermann tried hard when resuming with a close second to Cinderella Days here two weeks ago. Drops 5.5kg and he’s an each-way hope.

9. Narito faces his biggest test but he’s been impressive in two wins at the provincials and no reason
to think he won’t measure up. Good effort at Newcastle last time, asserting some dominance late when
he found room and with luck from an inside gate should go close.

Dangers: 3. Democracy Manifest impressed winning his first two starts for Chris Waller on heavy
tracks, at this track, before giving away too much start at Randwick back in May. Nice quiet trial
leading in and sure to be dangerous late. 20. The Poacher is an up and comer who won a good form race at Hawkesbury first-up a month ago. Interesting to see how he lines up here but no surprise if he is competitive. 16. Shalailed did nothing wrong as a two-year-old with a win and four placings from five starts and bears close watching first-up. Is trialling okay, draws well and is worth considering.

Supplied by Racing NSW
Full form and race replays available at racingnsw.com.au.
News, results and expert analysis from the weekend of sport sent every Monday. Sign up for our Sport newsletter

Goulburn gelding out to Defy Almighty Gold in Stayers Series