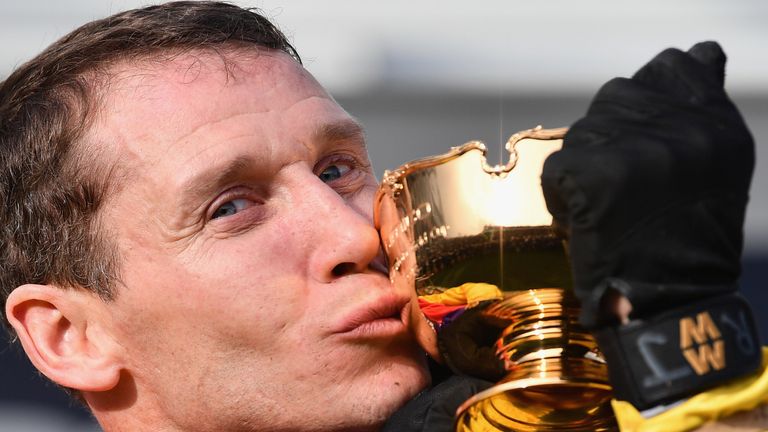 Richard Johnson had a quick chat about racing with the Queen as she presented him with an OBE on Tuesday.

Johnson, 41, has ridden more than 3,500 winners during a 25-year career in the saddle which has also seen him finish title runner-up to Sir Anthony McCoy 16 times.

After collecting his honour at Buckingham Palace, he said: “She asked me how the championship is going – and obviously Cheltenham is just around the corner.

“She is very engaging, and obviously it was a privilege for me that she presented the award.

“Obviously she does not do all of these ceremonies, so to get here and discover she was doing this one left me feeling that I could not be more pleased.”

An amazing day with these amazing people. #OBE pic.twitter.com/kocU743FaG

Johnson, who was proudly watched by his wife Fiona and children Willow, 10,

Casper, seven, and five-year-old Percy, said: “It has been a fantastic day and

just a big honour to receive the award.”

Johnson dated the Queen’s granddaughter Zara Phillips at the turn of the century, before they split in 2003.

His successes include two Cheltenham Gold Cups, a Champion Chase and a Champion Hurdle – and he is in the running for his fourth championship.

He said: “There are two more months left of the season. Cheltenham is just

around the corner. It has gone really well again – and fingers crossed we can

hopefully get the fourth championship as well.”

The New One could be heading for retirement