"It's International Women's Day, isn't it?" asked a beaming Tony McEvoy after his three-year-old filly Sunlight led from pillar to post to land the $1.25 million Newmarket Handicap, Australia's most prestigious sprint.

Reminded that the actual day had been celebrated 24 hours earlier on Friday, McEvoy didn't miss a beat. 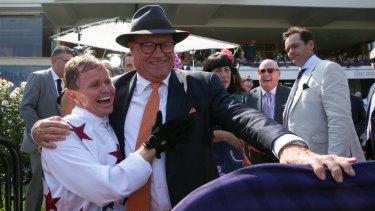 "It's a weekend now then, isn't it," he laughed, as he reflected on the enormity of the feat Sunlight shared with South African jockey, Barend Vorster, who was having his first ride down the famous Flemington "straight six" in the time-honoured feature.

Sunlight became the first of her age and sex to win the Newmarket since Alinghi in 2005, and she did it the hard way.

She was barely headed after breaking fast from stall nine and had to see off one of the biggest Newmarket fields in recent memory as 21 others attempted in vain, to run her down.

Her diminutive jockey might have lacked Flemington experience but at 42 and with decades behind him riding in South Africa and Singapore, Vorster was never likely to lose his cool even in these most exhilarating of circumstances when a rush of blood to a rider's head can cost the prize.

He judged the pace perfectly, aided and abetted by a willing performer, and had plenty in reserve to see off the late late challenge of Godolphin's race favourite, Osborne Bulls, with Brave Smash, second last year, filling third place.

The latter's stablemate Graff, who had chased Sunlight most of the way, faded in the closing stages but did well to hang on for fourth.

For McEvoy this was another step on the ladder of sustained success.

He had won a Cox Plate with Fields of Omagh 15 or so years ago when he was the fill-in trainer for the Hayes family, in a time following Peter's death and before David's return from Hong Kong.

But in the past few years, since concentrating his base at Flemington and at an operation in South Australia, he has gone from strength to strength.

And Sunlight has been a key part of the McEvoy story.

As a two-year-old she won the Magic Millions partnered by McEvoy's regular Melbourne rider Luke Currie, and last spring, again with Currie in the saddle, she beat the colts in the group 1 Coolmore over the Newmarket course and distance.

Even if Currie had cut off an arm there was no way he could ever make Sunlight's featherweight in the Newmarket so McEvoy gave the job to Vorster, a man who has only been in the country for a matter of weeks.

When Jamie Kah, who McEvoy used regularly to ride his Adelaide horses, relocated to Melbourne Vorster emailed and put his hat in the ring for the post.

McEvoy liked what he saw on his CV, and there is no doubt that he is even more enamoured with his lightweight new employee now.

"Isn't she something special? I think she led the whole way. We walked this track for two hours yesterday and we had a plan to come to the outside. He just couldn't quite there, the horses were on his heels, but he didn't panic, he showed his experience and the filly rallied so well," said McEvoy.

"She's an incredible filly. She keeps stepping up to the plate, the further she gets into a prep the better she gets. How strong was she at the end today of the 1200 metres?

"I know the three-year-olds only get 50.5, but she is a three-year-old filly … they were touting it to be one of the best fields, she's proven to be a star before today and confirmed it today."

Vorster was delighted to have landed such a huge prize so early in his Australian career.

"Australia is my new home now, and what a way to start it off … what can I say, she did all the talking herself," he said.

"She gave me a beautiful ride."

Race-by-race tips and preview for Randwick on Saturday