Track improving to Soft 5 and rail out 7m.

We open up on a drying track over the short sprint, and it shapes nicely for resuming Capitalist filly 5. Asteria who draws well. Took on Group 3 company on debut when dropping right out after leading on a heavy track, but on a better surface over the shorter trip and behind a forward trial, she’s the clear one to beat. 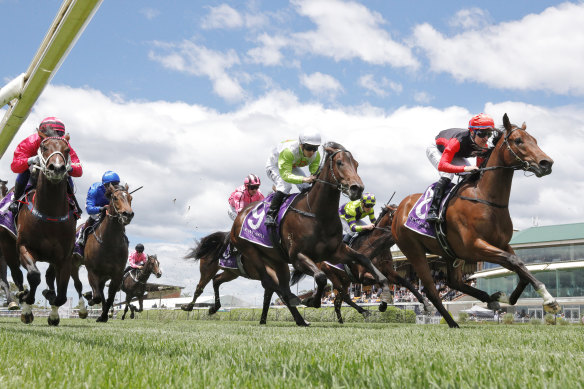 Racing heads to Newcastle on Monday.Credit:Getty

Dangers: Lightly raced 3. Procrastinator led for a long way first-up in heavy ground here, and staying at the distance; while 2. Great Siege resuming from the inside barrier; and I Am Invincible colt 4. Where’s The Fire who trialled well behind subsequent debut winner Hawaii Five Oh; fight out the minor end of the prize.

How to play it: Asteria to win
Odds and Evens: Split

Competitive betting race over the middle distance with a few chances. Like the value of provincial mare 9. Single Babe who peaks third-up with a claim. Did her best work late at big odds from the back at Wyong a fortnight ago, and while she doesn’t have to settle quite as far back here, the extra 150m is ideal.

Dangers: Keep very safe 7. Charity Gold who improves sharply second-up over 300m further, and with winkers added; while keeping watch on capable metro four-year-old 3. Villeneuve who was only even to the line on debut, but the first two are going places, and second placed Left Reeling then bolted in her maiden at Scone next start. Gap to the rest.

How to play it: Single Babe each way and box exacta 3,7,9
Odds and Evens: Odds

Given his brave and narrow second placing in far deeper metro company first-up, this should be a matter of times and margins for progressive Astern colt 1. Backrower who again draws to park right behind the speed. Powered home to win on debut here 15 weeks ago, and destined to win much bigger races than this.

Dangers: Doubt there are any, but emerging Dundeel four-year-old 3. Peak Legend can run the quinella off his smart debut win at this track in heavy ground; while improving mare 4. Flying Witness can also run into a place second-up from the inside draw.

Very keen here on Northern Hemisphere-bred five-year-old 3. Inuwashi who can take the next step behind a smart maiden win, second-up when heavily backed. Ideal trip at this stage being by Group 1 Royal Ascot winner Free Eagle who was at his best around 2000m.

Dangers: Stablemate four-year-old 4. Ocean Shores is a threat second-up dropping back from BM 72 metro company, and will relish getting back on firmer footing. Trained on the track, 5. Just Like Lisa is a super honest performer and has far more to offer than her solitary win and nine placings from 20 starts.

Hasn’t missed a place in her last five, and will be running on. Keep safe German-bred 6. Milka who is by 2014 Melbourne Cup winner Protectionist, and improves sharply second-up over a bit more ground and ridden a little quieter.

How to play it: Inuwashi to win
Odds and Evens: Split

Intriguing and potentially strong maiden for the girls here. Highly touted Randwick four-year-old 6. Ruinart should start paying back favorite punters, and is the one to beat, resuming behind two home trials. Has placed in deeper company across four straight runs either side of New Year, jumping a short-priced favourite each time, before being spelled. Looks the right starting distance for a mare that will settle back off speed.

Dangers: Big watch on progressive three-year-old 11. Ithadtobezou (also accepted for Warwick Farm on Wednesday) who gets weight relief at her fourth start, with winkers added. Another one hitting the right distance third-up is striking Irish-bred three-year-old 13. Perpignan who charged late to miss by a whisker in a handy maiden at Wyong.

Even better suited getting on a bigger track being by the outstanding triple Group 1 middle distance winner Ribchester. Improving three-year-old 9. Dame Cartland is best of the rest third-up from a softer draw; while fitter Vancouver four-year-old 1. Aggrandize can run a race at big odds after a fair closing effort on debut.

How to play it: Ruinart to win and quinella 6 and 11
Odds and Evens: Split

Another very testing maiden over the same distance, but like Fastnet Rock three-year-old 13. Stroke Of Luck to strike on debut. Draws to to find a nice position, and has been given two searching and forward trials up to 1045m, and significantly is out of a Galileo mare. Important gear additions have been made.

Dangers: Talented metro colt 8. Magic is a logical threat second-up off a strong closing effort at Hawkesbury, although wouldn’t want too short a price from a wide barrier in a field with good depth.

Another one on the rise, 14. Union Army is over the odds from the inside draw behind a strong closing run here on debut, and the winner of that race goes around earlier in the meeting so watch for that form reference. Included in wider exotics 4. Ambassadors third-up; and 15. Wellerman who is reloading via a nice trial win eight weeks after a plain provincial debut.

How to play it: Stroke Of Luck to win
Odds and Evens: Split

Promising four-year-old 5. Narito is primed to make it two straight after an impressive debut win at Wyong when he pulled to the middle and swept home with something in reserve. Only up 1kg for this, and bred to get further.

Dangers: Rival metro four-year-old 2. Strombus is over the odds third-up from a soft draw. Expect improvement second-up from 4. Da Nang Star after a handy closing return run; while further out in the market 6. Moralist; 9. Lonhraki and 14. Damaged if he gets a start; are all capable of running into a place.

How to play it: Narito to win
Odds and Evens: Split

News, results and expert analysis from the weekend of sport sent every Monday. Sign up for our Sport newsletter