Matthew Smith’s Tricky Gal has secured the final spot in The Invitation after the field for the inaugural $2 million fillies and mares feature was finalised.

While much conjecture surrounded the make-up of the last spot among the 12 starters, Smith received a phone call on Monday confirming his six-year-old mare had been given the nod.

Tricky Gal beat all bar Minhaaj home in the group 3 Nivison last start, doing enough to convince the committee she was worthy of a spot in the race, which will be held at Royal Randwick on Saturday.

“She’s going super,” Smith said. “She’s effective on both wet and dry tracks and 1400 [metres] is the perfect distance for her. I’ve had the feeling she’s going to knock one of these races over sooner or later.

“We’re over the moon to have been invited. We think she deserves her place in the field. If she runs her usual consistent race we think she’ll run really well.” 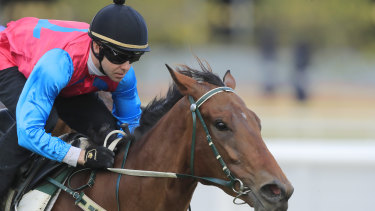 Tricky Gal has secured the last spot in The Invitation.Credit:Getty

New Zealand mare Entreviere is the $3 favourite with Sportsbet for The Invitation, ahead of Doncaster runner-up Icebath ($8) and Queensland filly Startantes ($8). The field will also include group 1 winner Forbidden Love.

Tommy Berry, from a nail-biting second on Masked Crusader in The Everest, will ride Entreviere with James McDonald isolating in Melbourne in preparation to ride Cox Plate favourite Zaaki.

Tabcorp has recorded record numbers for the 2020 Melbourne Cup coverage