A bold proposal to move the Cox Plate from October to late November to extend the public’s interest in horse racing will be given three years to succeed, should the idea be adopted.

Racing Victoria is preparing to underwrite a November Cox Plate for 2023, 2024 and 2025, by which time the Moonee Valley Racing Club will begin its major redevelopment and Racing Victoria will have a big enough sample size to determine whether punters and racegoers have engaged with the elongated carnival. 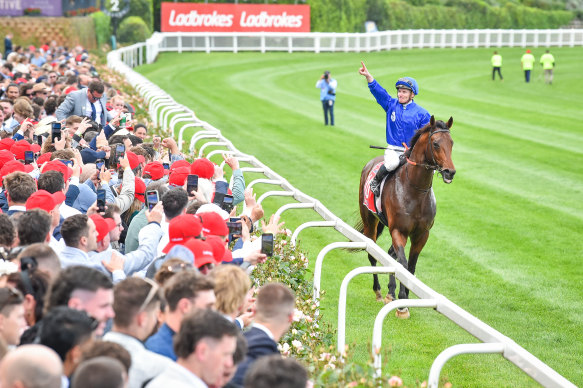 The Cox Plate could be moved to late November under a proposal to extend the spring racing carnival.Credit:Getty

Channel Seven’s head of sport Lewis Martin has lauded the proposal – which is set to reap significant dividends for the broadcaster given it broadcasts Victorian racing every Saturday outside of Cup week and Magic Millions – telling The Age the idea “makes a lot of sense and unlocks a lot of value for racing fans”.

“They’ll be packed to the rafters at The Valley and we see enormous TV viewing potential,” Martin said.

Meanwhile, four-time Cox Plate-winning trainer Chris Waller says he’s willing to put his faith in the sport’s administrators to make the correct call given the success of recent innovations, such as The Everest and Golden Eagle in Sydney and the Victoria Racing Club’s revamped Champions Day.

“We are capturing a greater audience with new races, and it’s hard to argue modern-day administration if they have valid reasons for change,” said Waller, who trained champion racehorse Winx to four successive Cox Plates.

Racing NSW’s supremo Peter V’landys, however, has declined to comment on the mooted spring carnival changes.

When Racing Victoria appointed Andrew Jones its new chief executive in July, it did so knowing the Big Bash League pioneer would have a keen interest in exploring new ways for racing to engage with the public.

It’s no surprise just seven months into Jones’ tenure that he has spent a lot of his time looking into how racing can better capitalise on clean air in November, given wagering turnover drops from $160 million on the Saturday after the Melbourne Cup to $60 million on the Cranbourne Cup meeting a week later.

“Fans are switching off,” Jones told The Age in November.

All three of Victoria’s metropolitan clubs were asked whether they would move their premium race meetings into late November, so the carnival finished with a grand final-like race.

The Victoria Racing Club wouldn’t budge on the first Tuesday in November for the Melbourne Cup, but Moonee Valley Racing Club showed a readiness to explore what a late November Cox Plate would look like.

The move will give The Valley an extra Saturday in spring carnival, which is the most lucrative timeslot in racing, but the club also wants the Cox Plate to be boosted to $8 million in prizemoney – equal with the Melbourne Cup – and underwritten revenue given the experiment.

“A Saturday in the heart of spring, it’s gold,” Browell told The Age. 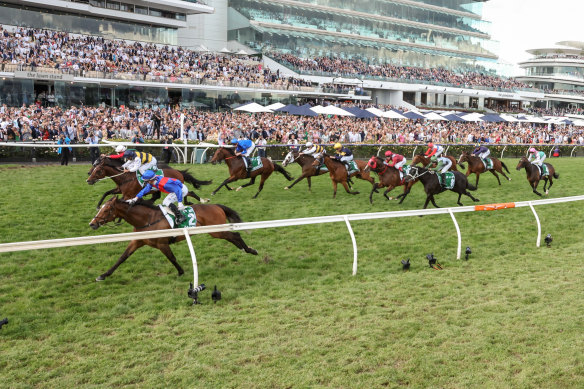 Moonee Valley is willing to explore a date move for the Cox Plate.Credit:Getty

“The opportunity is there for us to take two big Saturday dates right in the heart of spring, and we think we could make a commercial success out of that.

“Nothing ventured, nothing gained. We have a willingness to consider this opportunity, but it hasn’t moved too much in the past six weeks, so RV [Racing Victoria] better get their skates on over the next couple of weeks on the back of all the different conversations and consultations they’ve done and come back and present us with what they want to move forward with.”

Browell said the proposal, which he marked a 50 per cent chance of being approved, would need to be finalised by the end of February to give his club enough time to pull off the changes.

As part of the plan, the Manikato Stakes would also be held on the new Cox Plate day, with the group 1 Moir Stakes over 1000 metres to occupy the current Cox Plate date in late October.

Racing Victoria is exploring not only a Cox Plate meeting two weeks after Champions Day, but also moving the Thousand Guineas from the Caulfield Cup Carnival Wednesday to a standalone Saturday after Champions Day, with the aim of attracting large crowds and significant wagering revenue beyond Cup week.