The Chicago Bulls withstood a mighty performance from Luka Doncic on Sunday night to beat the Dallas Mavericks to end a four-game losing streak.

The Bulls’ 117-101 victory, which featured season-high production from Lauri Markkanen and Garrett Temple, was built on their scoring and ball movement. Chicago’s reserves outscored the Mavericks’ bench 61-22. The Bulls also locked in on defense, racking up a season-best 14 steals.

That output on both ends of the floor helped overcome a triple-double from Mavericks star Luka Doncic who dazzled with a game-high 36 points, 16 rebounds and 15 assists.

Doncic scored 30 points in the first half on 11-of-19 shooting, establishing a new career-best for scoring in the first 24 minutes.

Chicago shot 50.6 per cent behind six scorers in double figures while finishing with 32 assists against 13 turnovers. Lauri Markkanen had a season-high 29 points to go with 10 rebounds and Garrett Temple scored 17 of his season-high 21 points in the first half.

Kristaps Porzingis added 20 points and eight rebounds for Dallas in his third game back since recovering from offseason surgery on his right knee. Willie Cauley-Stein and James Johnson chipped in 10 points apiece.

Julius Randle and RJ Barrett each posted double-doubles Sunday as the visiting New York Knicks snapped a five-game losing streak with their biggest win in almost five years – a 105-75 rout of the Boston Celtics.

The Knicks never trailed in producing their biggest margin of victory since March 2016, when they defeated the Phoenix Suns 128-97. It was also New York’s biggest victory over the Celtics since a 102-70 win in November 1997.

The Celtics, who had their five-game winning streak snapped, suffered their heaviest defeat since a 116-86 loss to the Cleveland Cavaliers in Game 3 of the Eastern Conference Finals in May 2018. Randle finished with 20 points and 12 rebounds while Barrett had 19 and 11, respectively. Immanuel Quickley had 17 points and a team-high eight assists off the bench while Obi Toppin (12 points) and Reggie Bullock (11 points) also got into double digits.

The two teams were tied just once, at 2-2 in the first quarter. A dunk by Randle gave the Knicks their first double-digit lead at 28-17 in the final minute of the opening period.

It didn’t follow the script from their memorable 2020 first-round playoff series, but the visiting Utah Jazz earned a bit of revenge and their fifth win in a row by defeating the Denver Nuggets 109-105 in an entertaining showdown.

Jordan Clarkson, not Donovan Mitchell, led the Jazz with a team-high 23 points off the bench. Mitchell, who averaged 36.3 points against the Nuggets in their seven-game first-round series last summer, finished with 18 points after a rough start.

Bojan Bogdanovic, who couldn’t play against Denver in the playoffs because of a wrist injury, was a bright spot for Utah with 17 points, while Rudy Gobert contributed 15 points and 13 rebounds and Mike Conley added 14 points and eight assists.

Nikola Jokic continued his superb start to the season with 35 points, 14 rebounds and nine assists, but Denver fell behind early, finally took a lead, but couldn’t fend off the Jazz in the second half.

Jamal Murray picked up where he left off against the Jazz, whom the Nuggets beat three straight times to advance in the playoff bubble after falling behind 3-1. The Denver guard, who had a pair of 50-point games and averaged 31.6 points in the first round, scored 24 points in the opening half.

His offensive explosion and a 9-0 run helped the Nuggets take a 58-53 half-time lead however, Murray didn’t score in the third quarter and finished with 30 points after the red-hot first half.

Denver pulled within 94-92 thanks to a Jokic basket, but Derrick Favors followed with a three-point play and Mitchell attacked the basket as Utah went ahead 103-94. The Nuggets clawed back to within one with a late 7-0 run.

However, Mitchell hit a tough turnaround shot before Royce O’Neale sank two free throws and made a game-clinching assist to Gobert in the final seconds.

Zion Williamson scored 31 points and Brandon Ingram added 22 as the New Orleans Pelicans ended a five-game losing streak by hanging on for a 128-123 victory over the host Sacramento Kings.

Williamson went 13-of-15 from the field and 5-of-5 from the free-throw line while delivering his second-best scoring performance of the season. JJ Redick had 14 points, while Steven Adams added 12 with 15 rebounds.

Eric Bledsoe had a season-high 21 points as the Pelicans won a game for the first time since January 2.

New Orleans are now 1-2 on a six-game road trip that originally was scheduled for seven games before a match-up at Dallas on January 11 was postponed. 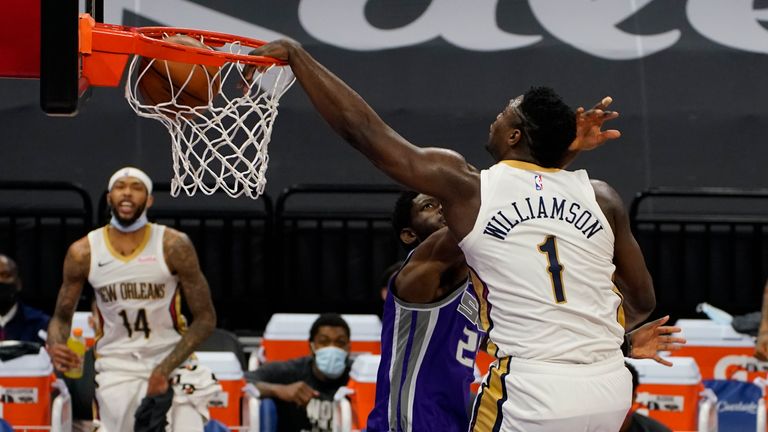 De’Aaron Fox scored a career-high 43 points with 13 assists for the Kings, while Marvin Bagley III added 26 points and 10 rebounds as Sacramento lost for the fifth time in their last six games.

The Pelicans led by 19 in the first half and 17 after half-time, but the Kings pulled within 116-115 with 3:18 remaining on a dunk by Fox while driving into a wide-open lane.

A quick 6-0 run gave the Pelicans a 122-115 lead before baskets by Bagley and Richaun Holmes got the Kings within three at 122-119. Bagley had a three-point attempt with 42.4 seconds remaining to tie the game but the shot bounced off the rim.

New Orleans closed it out from there on free throws from Adams, Redick and Nickeil Alexander-Williams.

Doug McDermott scored 23 points on 9-of-12 shooting – including 5 of 7 from three-point range – for the Pacers, who were without center Myles Turner (hand), the NBA’s leader in blocks at 4.2 per game.

Domantas Sabonis had 19 points, 14 rebounds and six assists and Malcolm Brogdon added 16 points and eight assists for the Pacers.

The Clippers, who led by as many as 34 points, blew the contest open in the third quarter after a Sabonis’ bucket allowed the Pacers to close within 63-61 less than two minutes into the third.

From there the Clippers outscored them 37-14 for a 100-75 lead heading into the fourth – a lead they never relinquished.

Just hours before tip-off on Sunday night, the NBA postponed a second game on the day’s schedule, the Philadelphia 76ers at the Oklahoma City Thunder, expanding the number of games the league has postponed to 15 in the first month of the season.

“Because of ongoing contact tracing within the Sixers, the team does not have the league-required eight available players to proceed with the scheduled game against the Thunder,” the league announced.

On Friday, the NBA postponed both games in a two-game miniseries between the Cleveland Cavaliers and Washington Wizards that was scheduled for Sunday and Monday in DC because of ongoing contact tracing within the Wizards – the team did not have the league-required eight available players to play against Cleveland.

Next up for the Sixers is a two-game series at home against the Boston Celtics scheduled for Wednesday and Friday while the Thunder are scheduled to travel to Denver for a matchup Tuesday.

Want to watch even more of the NBA and WNBA but don’t have Sky Sports? Get the Sky Sports Action and Arena pack, click here