Basketball season returned on Tuesday but on a night which began in a celebratory manner for the Los Angeles Lakers, finished with disappointment at the hands of their rivals the LA Clippers.

Before their curtain-raiser, the Lakers received their championship rings at their Staples Center for winning the 2019-20 NBA title in October.

However, once the action started it was Clippers star Paul George who delivered a gem of a performance as they spoiled LeBron James and Co’s party. 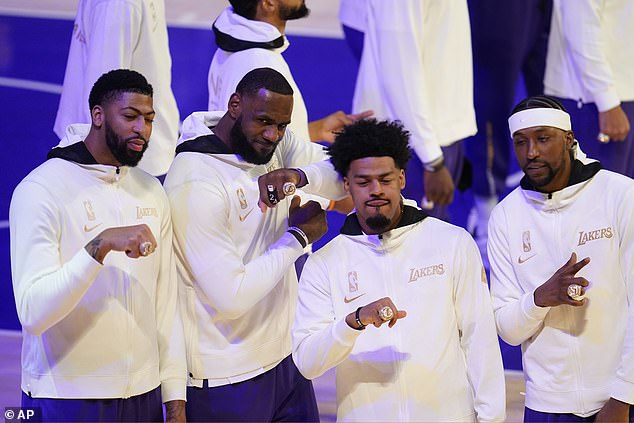 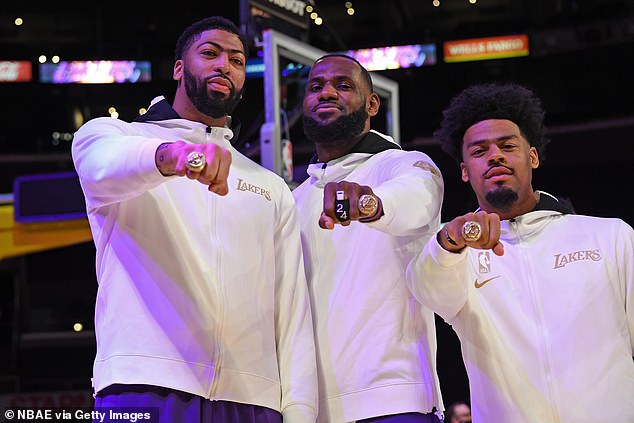 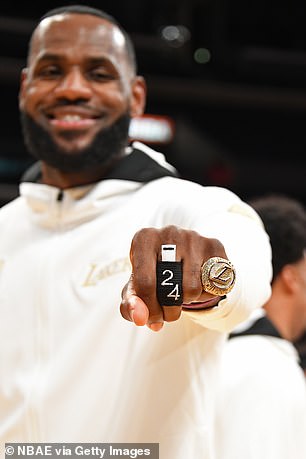 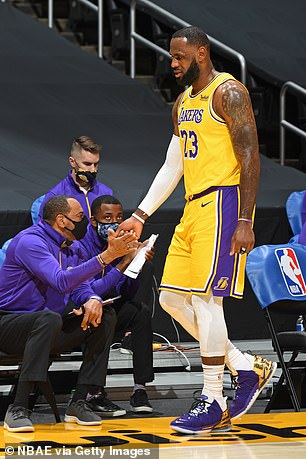 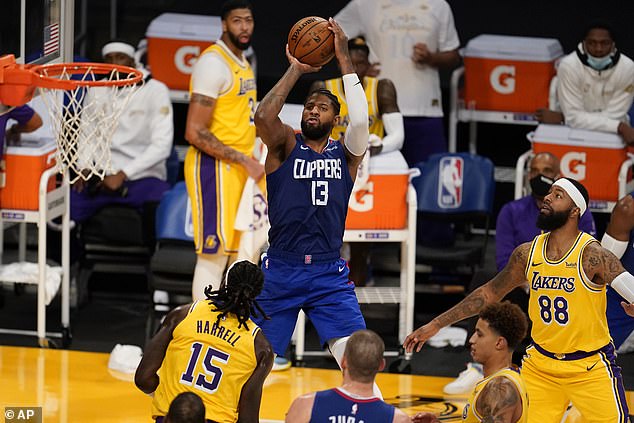 George scored 33 points, 26 in the second half, as the Clippers beat their Western Conference rivals 116-109. Kawhi Leonard scored 26 points of his own.

Six-time All-Star George went 13 of 18 with five three-pointers in an outstanding first game since agreeing to add four years and $190million (£142m) to his contract with the Clippers, who never trailed during the match.

It was a case of deja-vu for the Clippers who beat the Lakers in the season opener for the second straight year, while winning coach Tyronn Lue’s debut.

The Clippers stayed in their locker room while the Lakers received their rings, but they emerged with purpose and determined play – from their two superstars in particular.

‘Our focus was on us,’ Lue said. ‘The Lakers, they deserved that ring. They had a great year, and you can’t take nothing away from them. Our focus wasn’t really on the Lakers. They were the best team last year, so congratulations to them again, but now we’re moving on.’ 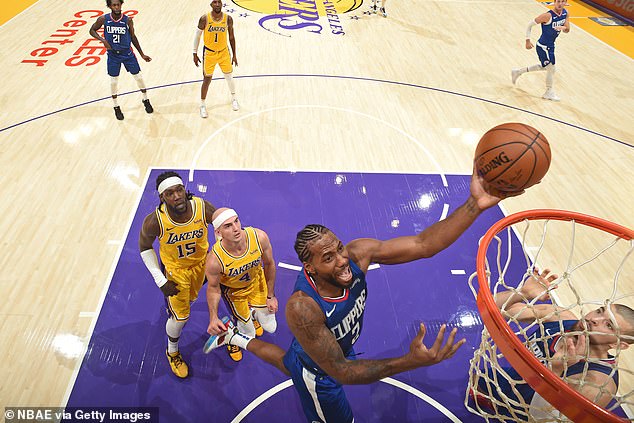 James scored 22 points and Anthony Davis had 18 for the Lakers just 72 days after they finished off the Miami Heat in the NBA bubble.

The Lakers returned from the shortest offseason in league history and celebrated the franchise’s 17th title, but they couldn’t keep up with George and Leonard down the stretch. Lakers coach Frank Vogel also limited James to 28 minutes and Davis to 31, anticipating the long grind ahead on his veterans after a 10-week offseason.

‘It’s not ideal, but I do feel it’s necessary to manage those guys’ minutes the right way,’ Vogel said.

‘Getting through this stretch healthy is a priority, and evaluating how our new guys fit is a priority when we haven’t had a normal amount of time to do that. The five guys on the floor have got to be better than they were tonight.’ 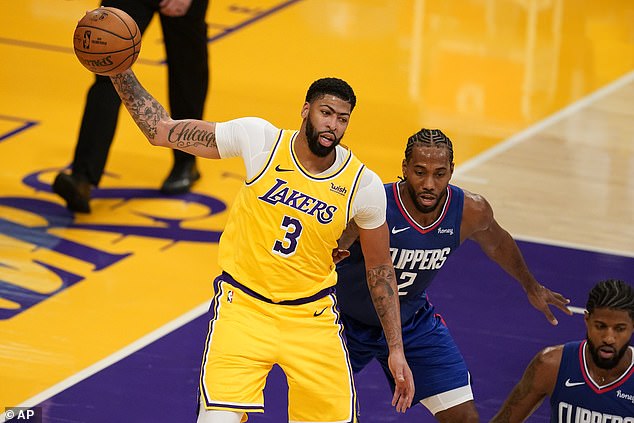 This was the second game of the NBA season with the first match taking place earlier on the east coast as the Brooklyn Nets took on the Golden State Warriors.

All eyes were on Nets forward Kevin Durant who was playing his first NBA match since rupturing his achilles tendon during Game 5 of the 2018-19 NBA Finals against the Toronto Raptors on June 10, 2019. There was extra spice to this encounter as the the 2014 MVP suffered the injury while playing for Golden State.

And the 32-year-old impressed following 18 months out as he scored 22 points on debut in a comfortable 125-99 victory.

Durant also chipped in with five rebounds and three assists during 25 minutes of action as the Barclays Center.

Kyrie Irving top scored for the hosts with 26 points, while Caris LeVert also chipped in with 20 points. 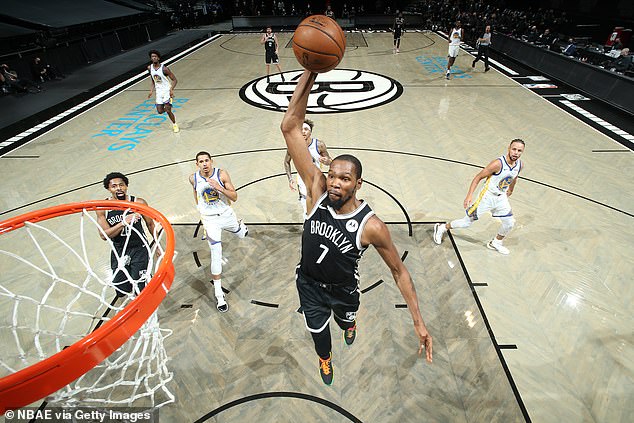 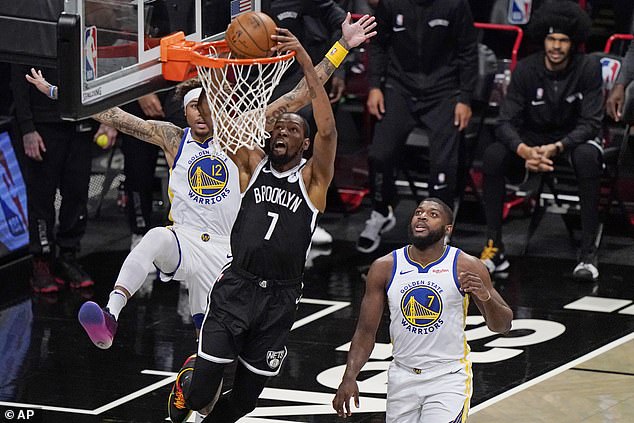 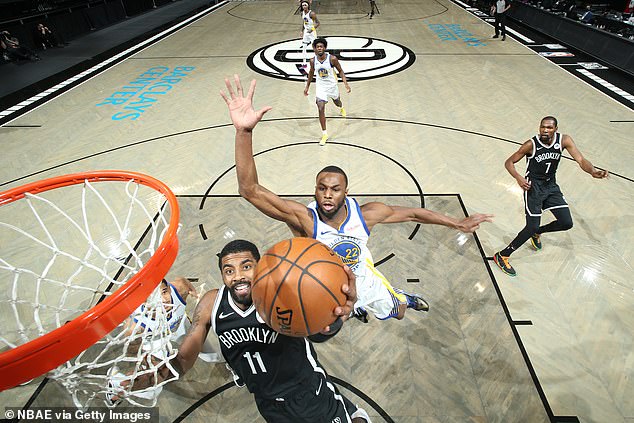 When asked about 10-time NBA All-Star Durant’s return to the court, Nets head coach Steve Nash said: ‘It’s a big, big difference in taking 18 months away from the NBA and coming back into the NBA with everything he’s gone through.

‘He looks like Kevin, he plays like Kevin, but I don’t want to start making expectations of him until he gets going and gets some games and some rhythm under his belt and adapts to playing three in four nights and playing almost every other night for a stretch.

‘That’s the next step for him. We’ve got to just take it day-by-day with him.’

Stephen Curry posted a double-double for the Warriors with 20 points and 10 assists but they never looked like troubling the Nets, who, on Nash’s coaching debut, ended a seven-game losing streak in season openers with the victory. 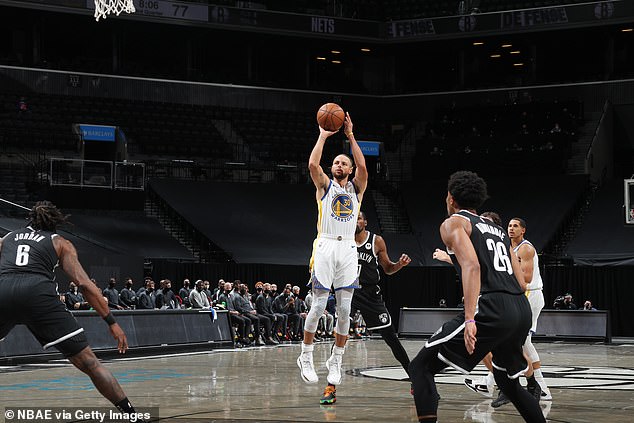