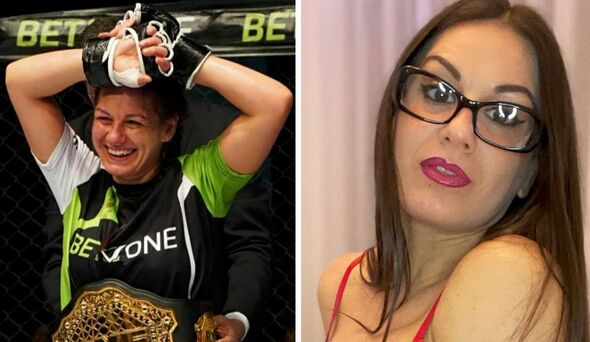 An OnlyFans star, who is using the platform to fund her UFC ambitions, says she was forced to quit her old gym after the wives of fellow MMA fighters sent her hateful messages. Alice Ardelean is a talented MMA fighter and has won her last five bouts – beating debutant Jenny Line in less than a minute in her last fight.

Ardelean turned to OnlyFans to help fund her dream of signing for the UFC after quitting her £600-a-month security job. The move has been a success with the Romanian-born fighter earning around £10,000 a month from the platform.

However, the UFC hopeful had to move to Ronin MMA gym in Birmingham after women at her old training base complained. She told the Daily Star: “I used to train at a gym when I started OnlyFans and I kept getting dirty looks. I even had a few messages from wives from guys in the gym saying ‘you are such a whatever’ and calling me names.

“They were afraid their husbands would subscribe. I was forced to move gyms to avoid all this drama. In reality the only reason why I was doing OnlyFans was to be able to pay for my training, nutritionist and gym equipment every day.

“I was just minding my own business but the hate was there. Some of the hate was nasty and women in the gym were complaining about me. It was just embarrassing. It was like, shut up, I am not here to take your man. This is just my job and I’m not interfering with your job. It’s not my fault if your husband was on my OnlyFans or not.”

Ardelean has an MMA record of 7-5 and is set to fight for the EFC strawweight title in March. After an impressive stoppage of Line in March last year, Ardelean struggled to find willing opponents with her planned fights in South Africa and Northampton both cancelled due to her opponents pulling out.

Ardelean made her MMA debut 10 years ago and revealed that she started martial arts training after being bullied about her weight. “I used to be bullied because I was a bit chubby,” she added. “I started doing MMA about 12 years ago because the guys were a bit aggressive and I was scared somebody was going to hurt me.

“It is really weird because some of my bullies have been sliding into my DMs which is funny. I’m now known in MMA all around the world and popular for having one of the biggest and roundest booties.”

Warriors vs. Lakers: Time, TV channel, how to watch online

Nuggets Mailbag: What does Denver’s ideal bench look like, and is Bruce Brown a long-term piece?